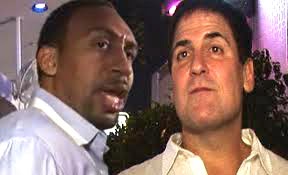 Even if you are not a sports enthusiast, you have probably heard the uproar over comments made by Dallas Mavericks owner Mark Cuban and ESPN commentator Stephen A. Smith.  For those who are unaware of what started this controversy, it is all centered around a statement Mr. Cuban made to Inc. Magazine.
There is a never-ending fascination with a secretly taped conversation in which Los Angeles Clippers owner Donald Sterling made some rude and boorish statements on race.  In that vein, Cuban (who is white) addressed the situation in an honest and open fashion, saying, "I know I’m bigoted in a lot of different ways. If I see a black kid in a hoodie and it’s late at night, I’m walking to the other side of the street. And if on that side of the street, there’s a guy that has tattoos all over his face — white guy, bald head, tattoos everywhere — I’m walking back to the other side of the street. And the list goes on of stereotypes that we all live up to and are fearful of …. No one has pure thoughts; but it’s about recognizing when you have thoughts that aren’t right."
What a refreshing change!  Most people in the spotlight choose to run from such politically correct and socially charged commentary.  But Cuban got it right!  He was honest, candid and forthright in his observance of his own prejudice.  And while we're at it, let me say that I think the word prejudice has gotten a bad rap.  According to the dictionary, the word prejudice means "preconceived opinion that is not based on reason or actual experience."  I would venture to say that most of us, no matter what our race or ethnicity, have a pretty good idea of how we would react in certain situations.  While some will exhibit inherited and unwarranted bigotry and discrimination, there is plenty of evidence in the world for us all to form our own ideas of how we might feel and react to any particular person.  It may be preconceived, but it is often based on fact.
Of course, there was almost instant backlash over his including a description of "a black kid in a hoodie".  His critics accused him of dishonoring the memory of Trayvon Martin and increasing racist attitudes.  But the condemnation begs the question… is Trayvon the only adolescent who has ever worn a hoodie?  Is it reasonable to entertain the thought that the hoodie has become a symbol of aggression, no matter who wears it?
And that is exactly why Stephen A. Smith defended Mark Cuban's argument.  As a black man, that took tremendous courage!  And he displayed his own sincere brand of directness.  “He [Cuban] talked about the prejudices that exist in all spectrums by all of us,” said Smith. “Are we going to sit here and literally act like we have no prejudices?”  In fact, he challenged his own race for their part in encouraging the stereotype.  And for that he has suffered the usual abusive language and insults that comes when a black man refuses to play the victim.
But it takes a bold man to face his own image in the mirror.  And that is exactly what both men did!  At the root of their confessions is the plain truth that none of us is perfect.  Would it be nice if we could all view each other through rose-colored glasses and ignore our broken, disrespectful, and corrupt natures?  Of course!  But the truth is that man is flawed and will view anyone who is different in a negative light.  To claim that bigotry and racism flows only one direction is ludicrous!  Add to that the fact that not everything is a racial issue, and you can see the reality of just how much the racist card is over-used.
The fact that these two men were willing to incur the wrath and name-calling from their own race, and to cross racial lines to bring some much needed sanity and reality to our national dialogue, speaks volumes of their character.  Until we are willing to engage in plain-spoken and genuine discourse, and cut through the PC crap, nothing will change.  The truth is that we all need to work on how we treat our fellow man; regardless of race, gender, age or social status.  Mark Cuban and Stephen A. Smith have taken positive steps in turning the tide and they deserve praise, not recrimination.