My Thoughts On The Michael Sam Controversy 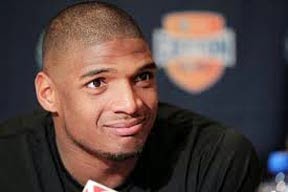 I understand that to a growing number of people in the American culture, that any word construed as negative in regards to Michael Sam will be condemned.  Sam, who is the first openly gay man to be drafted in the National Football League added to the controversy by allowing himself to be filmed kissing his partner on live TV.
Let me start by saying that I know nothing of Mr. Sam's skills as a football player, but I am genuinely happy for anyone who reaches such a respected goal.  If he has the skills, he should be rewarded -- his sexuality has nothing to do with his just reward.  And his emotion was obviously authentic and sincere, as was that of his partner.  I saw two people who really cared for each other.
But as a Christian, it is my sincere belief that this relationship is not a healthy one for Michael.  He is not engaging in a relationship for which he was designed.  Is it my place to condemn him for that?  No! Only His Creator has the right to judge him.  But neither do I think I should be censured or faulted for my opinion, as long as it is expressed with respect for him as a person.
You see, my same God who has expressed how He intends for us, whom He has created, to be joined together, also instructs me to love my fellow man.  Loving Michael Sam, means to treat him with kindness, respect and concern.  Loving Michael Sam does not mean agreeing with everything he does or giving my blessings to a lifestyle that my God does not approve --- anymore than I could encourage a heterosexual relationship that my God does not approve.
Michael Sam has made his choices and his personal life is his own.  I find it ironic that the PC Culture is OK with him expressing himself, but feels warranted to applaud the fine, suspension and forced "re-education" of Miami Dolphins player Don Jones for expressing himself.  I will admit that Jones' tweet did not convey love or respect; there are kinder ways he could have voiced his opinion ... BUT his opinion was mildly expressed in comparison to the punishment that was meted out.  I have no doubt that it was his opinion that resulted in his retribution -- not the way Jones expressed himself.   The fact that he did not agree with or applaud Michael Sam's actions automatically earned him derision and discipline.  He dared to defy the mandatory acceptance as proscribed by the Official Agenda of anti-Christians.
So where does that leave those of us of Faith?  Are we to remain silent and not express any opinion that goes against the non-believing culture?  That is surely how they would like us to behave.  But what are we called to do?  I truly believe we are to follow the mandates of God in Scripture ... love Him, love our fellow man, and speak the Truth.  I can love Michael Sam as a fellow human being, while speaking God's truth about his actions.  I can recognize that I, too, am just as guilty of doing things that do not please my Creator, and therefore am not qualified to judge others.  I simply ask for the same love and kindness that I am willing to give.  But I want to make it clear that I will not compromise my Faith for acceptance by society.  Jesus paid too high a price for me ... I do not seek favor with the world, and if my Christian faith costs me, then I am willing to accept that.  And I will pray that Michael Sam's talents bring him success, and that he finds God's purpose for his life.

1 John 3:1    "See what kind of love the Father has given to us, that we should be called children of God; and so we are. The reason why the world does not know us is that it did not know Him."
Posted by Pam Kohler at 7:00 AM