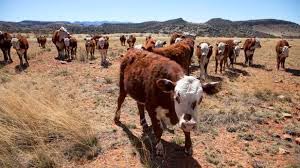 For many summers, PLW and I have spent hot, dusty days in Arizona as we travel to remote ranches, photographing the modern cowboy for my husband's western art.  There's something about the heat in Arizona ... it's dry and intense; the sun's searing rays leave you exhausted and parched.   You can't get enough water!  But the hope of the rancher has always rested on the summer monsoons; a pronounced season of increased rainfall that begins on June 15 and ends on September 30, with the storms peaking between mid-July and mid-August. On average, about half of Arizona receives nearly half of its annual rainfall during the monsoon.
Now, one of our favorite places to visit -- Williams, Arizona -- is suffering from a severe drought.  According to the Associated Press, it is so severe, that restaurant patrons don't automatically get a glass of water anymore. Residents caught watering lawns or washing cars with potable water can be fined. Businesses are hauling water from outside town to fill swimming pools, and building permits have been put on hold because there isn't enough water to accommodate development.  Nearby reservoirs are drying up and the town wells have been pumped to capacity.
But Arizona is not the only state suffering.  Much of the West is under water restrictions.  More than a dozen rural towns in California recently emerged from emergency water restrictions that had a sheriff's office on the lookout for water bandits at a local lake. One New Mexico town relied on bottled water for days last year. In southern Nevada, water customers are paid to remove lawns and cannot install any new grass in their front yards.  In El Paso, Texas, residents can't water outdoors on Mondays. And officials have been reusing treated wastewater and investing in a major desalination plant that turns salty, unusable groundwater into a drinking source for the border city.
You can imagine how this is effecting businesses and ranchers.  Here in Texas, the drought has resulted in more frequent and longer lines at the sale barn, as ranchers cannot afford to feed their cattle.  The drought definitely has a trickle-down effect (pardon the pun).  Our food supply (including fruits, vegetables, and meat) will be diminished, culminating in higher prices at the grocery store, and hurting families that are already struggling from a weak economy.
For now, the folks in Williams are praying that God will cause the rains to come.  They are banking on the monsoons to replenish reservoirs and underground water supplies.  They "still have hope God will send us the rain ... We know in due time, the lakes will fill back up, the snow will come," they say.  We all need to join them in those prayers because without rain, droughts lead to famines; and this nation is not prepared to suffer a lack of food -- something 936 million people in the world experience today.  Take note of the warning signs, and please don't take that next meal for granted.

Amos 8:11    "Behold, the days are coming,” declares the Lord GOD, “when I will send a famine on the land— not a famine of bread, nor a thirst for water, but of hearing the words of the LORD."