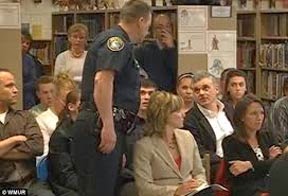 I'm sure most of you are aware of William Baer's arrest for breaking the two-minute speaking rule at his local New Hampshire school board meeting.  Mr. Baer, who made it a habit to be involved in his daughter's education, and often frequented and spoke at such meetings, made the huge mistake of daring to question the curriculum that was selected for his daughter.

2 Corinthians 12:21   "I fear that when I come again my God may humble Me before you, and I may have to mourn over many of those who sinned earlier and have not repented of the impurity, sexual immorality, and sensuality that they have practiced."
Posted by Pam Kohler at 7:00 AM

Email ThisBlogThis!Share to TwitterShare to FacebookShare to Pinterest
Labels: Education, Our Culture., Our Youth