Is This The American Way? 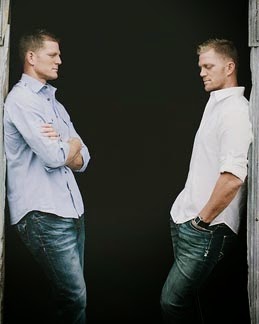 I have a couple of questions today ... Who gets to decide which "agenda" a nation should conform to?  And what qualifies that agenda to become the standard by which all must obey?  These issues are on my mind in the wake of HGTV canceling a new program featuring brothers, who just happen to be up front about their faith.
The twin brothers, Jason and David Benham, saw their show, "Flip It Forward", cancelled before it was ever aired.  The reason?  A blog post by Right Wing Watch, a subsidiary of Norman Lear's liberal progressive advocacy group, People for The American Way, purported to reveal the brothers' anti-homosexual, anti-abortion, anti-Muslim views.  The fact is, when someone who does not share the Christian faith attempts to comment on its standards of behavior, they often misrepresent them and distort them.
Of course, when David Benham writes the following in The Christian Post, those who do not understand the Gospel Message will only see hate.  He wrote:

Now, you and I know what he meant by this discourse.  He does not state that he hates homosexuals.  He says that God has pronounced a particularly stark sentence on this specific sin ... BUT the sin of homosexuality, like all sins, is covered by the atoning blood of Christ.  However, in today's world, this particular sin has become different than other sins that are forgiven.  There is a power behind it that attempts to influence or force a program of action ... that is the "agenda" that Benham speaks about.  This force, which is carried out by various organizations, such as Right Wing Watch, demands that this sin not only be accepted, but promoted; in effect to be declared a non-sin.
The Benham brothers have now become the latest in a select group of Believers who dare to stand boldly for the life to which God calls us all.  I am impressed with how they have handled this situation; saying that they can choose to love others (including homosexuals and Muslims), while still adhering to God's standards and principles.  In fact, they hold no grudge against the HGTV network, who knew of the brother's faith and opinions on this topic and others, equally as controversial.  "We don't feel wronged at all. This isn't HG versus us, or us against the gay community. This is an agenda, and we're getting to witness it right now," Jason Benham said.  "Our comments have never been aimed at gays, but at an agenda that says you can't stand by your beliefs.  It's only going to get worse because [of the  agenda] that wants to silence the beliefs that we have."
Are they outspoken about their opinions on issues that God finds offensive?  Yes!  They have not shied away from protesting in front of abortion clinics, declaring that "87 percent of Americans are Christians and yet we have abortion on demand; we have no-fault divorce; we have pornography and perversion; we have a homosexuality and its agenda that is attacking the nation; we have adultery; we have all of the things; we even have allowed demonic ideologies to take our universities and our public school systems while the church sits silent and just builds big churches. We are so complacent, we are so apathetic and we are very hypocritical in the church, that’s why the Bible says judgment begins in the house of God."   By definition of the Liberal Left, these comments are labeled extremist.  But if you call yourself a Christian, who can truthfully deny them?!
So now, there is a demand that the Benham brothers be silenced because a certain segment of the population doesn't agree with them.  Does that conform with the mission statement of People for the American Way?  In part, their "Vision" on their website states thus:
•  People For the American Way is dedicated to making the promise of America real for every American: Equality. Freedom of speech. Freedom of religion. The right to seek justice in a court of law. The right to cast a vote that counts. The American Way.  (Except if your Christian values are in contrast with what we determine is "real".)
•  Our vision is a vibrantly diverse democratic society in which everyone is treated equally under the law, given the freedom and opportunity to pursue their dreams, and encouraged to participate in our nation’s civic and political life. Our America respects diversity, nurtures creativity and combats hatred and bigotry.  (Unless we disagree with your belief system; then we will subject you to our own brand of hatred and bigotry, and deny you the freedom to pursue your dreams).
Go to their website and you will get a clear picture of what their "vision" is ... to promote the Progressive agenda, by any means available; and that includes bullying TV networks to silence anyone who voices Christian values.  Unfortunately, Jason and David Benham did not have the following of Duck Dynasty --- their show was cancelled before it ever aired!  But as they proclaimed shortly after the call from HGTV, "If we have to lose our show because of our faith, so be it."  Sorry, Progressives ... no hate speech, no condemnation; nothing but the willingness to continue to promote the Love of Jesus Christ.  You can try to take away our livelihoods, silence our voices, and paint us as extremists.  But we will continue to pray for you and seek to conform ourselves to the image of Christ.  That is the American Way I envision, and that is the only agenda that will truly change men's hearts.

Ephesians 4:17-18     "This I say, therefore, and testify in the Lord, that you should no longer walk as the rest of the Gentiles walk, in the futility of their mind, having their understanding darkened, being alienated from the life of God, because of the ignorance that is in them, because of the blindness of their heart;"