We Looked On It In Amazement 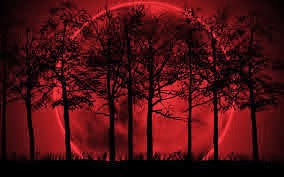 If you were one of the lucky ones who got to witness the blood red moon in the wee hours of Tuesday morning, then I hope it struck you with awe and wonder.  I know if you watched this spectacular sight from Salmon, Idaho, you might want to view it with a new perspective today.  An earthquake swarm that included hundreds of low-level and medium-sized earthquakes have struck central Idaho since last month.  According to the news report I saw, the latest seismic surge, including 100 small to moderate quakes on Monday alone, has scientists perplexed.  Apparently this swarm doesn't appear to be on the big, active fault in the area that ruptured in 1983, which was the largest earthquake to hit Idaho in modern history.  Hmmm, scientists can't explain it ....
And if you live in Ukraine and saw the blood red moon, you must be wondering what it portends for your future.  On Tuesday, Russian Prime Minister Dmitry Medvedev announced that Ukraine is on the brink of civil war.  Is this a thinly disguised excuse to "go in" and restore order, while at the same time, instigating the very reasons for the unrest?  While you might think this is a regional matter, Ukraine is at the heart of an event that could impact the entire world.  Hmmm, wars and rumors of wars ...
Then, if you observed the blood red moon from West Africa, you might have seen a connection between its appearance and the rapidly spreading ebola virus.  Having moved from the jungle to a densely-populated urban area in Conakry, the capital of Guinea, this deadly virus has the potential to spread worldwide.  Passengers are being screened at airports in an attempt to keep the virus from becoming a global epidemic.  With the death toll rising, let's pray that health officials can accomplish this task.
Droughts in California mean less fruits and vegetables for market and higher prices; while droughts in Texas are doing the same thing for the price of beef.  When you can't feed your cattle, they usually end up at the slaughterhouse, which results in fewer calves being born, and eventually less beef at the grocery store.  All this results in the highest price for beef in almost three decades.  Hmmm, disease and higher costs for food .... does "A quart of wheat for a denarius" (that would be a whole day's pay) take on new significance?  And is it coincidence that we are seeing only the third series of blood red moons in nearly 500 years?
I know I keep harping on the possibility that the headlines of our day are showing us moving towards prophetic, Biblical events.  But I do not want you to dismiss these seemingly chance occurrences.  They are happening simultaneously and sure feel to me like they are leading up to something BIG!  If you've never opened your Bible, I urge you to take a look at the Book of Revelation.  And if you do read your Bible, take a closer look at this prophetic book.  Yes, I know it is the most difficult Scripture in the entire Bible, but for those who will hear and see, I think it will make our daily headlines come into clear focus.  The blood red moon may be gone until later in the year; September to be exact, but keep your eyes aimed at the heavens.

Revelation 6:8    "So I looked, and behold, a pale horse. And the name of him who sat on it was Death, and Hades followed with him. And power was given to them over a fourth of the earth, to kill with sword, with hunger, with death, and by the beasts of the earth."