The Liberty Movement: What Does It Mean To You?

When Patrick Henry declared "Give me Liberty, or give me Death!" in 1775, we all pretty much know where he was coming from.  The British colonies in America were declaring themselves independent and free of the oppressive actions of the British Empire.  The word "Liberty" has been burned into the consciences of Americans ever since.
In fact, over two and a quarter centuries later, the desire to be free of an oppressive government is still alive and well in the American DNA.  So much so, that I daresay the word "Liberty" has even inspired its own movement.  I wonder if you've given any thought lately to exactly what that looks like, and what it means to you.
The incident at the Bundy Ranch in Nevada is still very much in the news and has generated quite a bit of conversation from the varied groups of people I am associated with.  Of course, there are still those within my sphere of friends that don't have a clue what the whole thing was about, so they don't have any real opinion on the dynamics of the Liberty Movement. 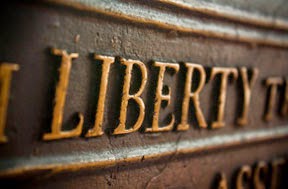 But of those who are tuned in to the situation, I have been surprised at the diverse points of view.  First of all, let me say that each opinion is backed up by a love of liberty.  Each group lays claim to a love for this nation and what it stands for.  But each has a different take on what happened in Nevada last week.
To start, there are those who have a strong military background; who have served this nation in uniform and know, not only the meaning of Liberty and Freedom, but have fought on our behalf to maintain it.   But they also have a distinctive position about the course of action that was needed and taken here.  They have been trained in procedures adopted to deal with a particular situation, and in their minds Federal agents did the right thing in attempting to bring Cliven Bundy to justice.  They look at it through a black and white lens ... he broke the law, and those Federal agents were ordered by their government to enforce the law.  They did their job.
Furthermore, they were scornful of the militia groups and "Patriots" who showed up in full force to defend the Bundy family.  They laughed about the photo of the Bundy supporter on the bridge with his rifle trained on the conflict below him.  These trained military personnel saw him as a dangerous component to the whole picture.  They claim that there were snipers that he didn't even know existed all focused on him, and if he was foolish enough to start a gunfight, there would have been lots of innocent victims killed by his irresponsible actions.  They simply felt that spilling blood over cattle was not only ridiculous, but absolutely unnecessary.
And although I don't know anyone who is in a militia group, I have read their statements about the confrontation in Nevada.  I tend to agree with the military position, that some of these groups are potentially dangerous by not contemplating what they will set in motion, should they decide to ever act.  I understand their passion about a government that has become too regulatory, too much about maintaining their own power, and not enough about securing our individual liberties.  While I fear that some may become too anarchist; and even suspect that there are those within this subset of people who would love to take advantage of the Nevada conflict to instigate a violent reaction, I do not doubt their love for our country, nor their desire to see true Liberty established in this land.
Finally, there are those like myself, who do not attach themselves to any "group", but are becoming increasingly leery of more government control over our lives.  However, I believe that my Liberty does not come from the Federal Government, but from God.  Like Pastor Chuck Baldwin said, as he prayed with the Bundy supporters in Nevada, "If what we do here does not honor and glorify our Creator God, then it is all for nothing.... Government did not give us our liberties and freedoms, God did."
Thomas Jefferson made that clear in the Declaration of Independence ... We are endowed by our Creator with certain inalienable rights; Life, Liberty and the Pursuit of happiness.  I just want that life -- the one intended for me by my God, and free of the burdens placed on me by an overbearing bureaucracy who has forgotten that they work for us.
But what about those who also believe in Liberty but not in God?  I would venture that I might be at odds with them on how to keep our Liberty.  Not that I believe God expects us to be pacifists in all things, but that if we follow and glorify Him, He will let us know when and how to protect the Liberty He has bestowed upon us.  Make no mistake!  I want the Liberty and the Freedom that comes from keeping the government out of my life as much as the next person.  That being said, violence is the last measure that I would ever desire.
So, who really defines the Liberty Movement?  And can all of us find common ground?  Together, can we keep this big ship called America afloat?  And can we do it without coming into conflict with each other?  Peaceful means are always preferred over those that involve violence.   Perhaps we all need to contemplate on the meaning of Liberty ... the state of being free within society from oppressive restrictions imposed by authority on one's way of life, behavior, or political views.  The question is, "How do we get there?"
Finally, wouldn't it be a shame if these three groups found themselves in conflict with each other?   It is my prayer that all three groups of liberty-minded individuals will give serious thought to any law, order, or temptation that would call us to battle each other.  We can all get on the same page and defend  the precious liberties that have been a hallmark for this great nation.

1 Peter 2:15-16    "For this is the will of God, that by doing good you may put to silence the ignorance of foolish men -- as free, yet not using liberty as a cloak for vice, but as bondservants of God."
Posted by Pam Kohler at 7:00 AM