A Good Old-Fashioned Schoolin' in the Constitution

Just some continuing thoughts on the fight for Liberty in Nevada.  I listened to an interview yesterday between Cliven Bundy and a well-known conservative talking head ... I'll just go ahead and reveal who it was -- Glenn Beck.  I was astounded at Beck's lack of knowledge about what was behind Mr. Bundy's protest.
First of all, he took calls from several ranchers and neighbors of Mr. Bundy before interviewing Cliven himself.  They were well-spoken and able to express the mindset of all those who stood in support of the Bundy family.  They gave eye-witness accounts of the events and tried to convince Beck that at no time did the crowd of supporters get out of hand, and that they had handled themselves lawfully and appropriately.  It soon became clear that Glenn wasn't comfortable with that assessment, nor does he really understand the Western mind.  I do.
You see, my husband has spent nearly 19 years painting the iconic modern American cowboy.  We have spent many weeks in hot, dusty cattle pens in Arizona and Nevada with these men and women.  As I saw those brave cowboys on their horses approach the BLM and federal agents, tears were in my eyes, because I know they are men of honor, integrity and rock-solid values.  I'm sure that some of them were people who have touched our lives. 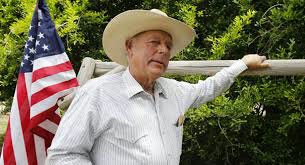 Then I felt Beck demeaned the Nevada rancher by explaining to the audience, prior to hearing Cliven, himself, speak, that we must understand that he is an "old man".  As if somehow, his explanation of what he stood for may not be quite persuasive or eloquent.   But it was obvious to me that Beck doesn't understand a thing about what drives these people to live the hard, noble lives they do.
Glenn was so worried about what other news outlets were doing; claiming that they were fomenting "conspiracy" and violence by sending their reporters in.  He felt their coverage showed that the Bundy cause was uncooperative with the Feds, and he questioned Cliven about that.  First of all, we all know the "other" news agency is Alex Jones, and InfoWars.  I'm getting a little tired of the ongoing feud between these two -- mostly on Beck's part.  From my perspective, at least Alex had reporters on the scene covering what was happening.  What kept Glenn from sending his own?  How can you throw stones, if you aren't there evaluating the situation yourself?  But that's just my two cents worth on the pettiness.
Back to the interview with Mr. Bundy.  Glenn tried over and over again to get Cliven to admit that he was wrong in not paying his grazing fees, and to perhaps admit that the conflict with the BLM was at least partially justified on the part of the government.  But "old" Cliven then began to school Glenn on the Constitution and the Tenth Amendment.  It quickly became clear that Cliven knew his stuff and the law, and that Glenn has formed his own uninformed position on this matter.  He had made up his mind what happened and why, and he was hoping to prove his point by getting Bundy to admit to a false argument.  But Mr. Bundy stood his ground and made Glenn look like a fool.
Maybe I'm a little prejudiced about this interview, but I also know that having 26 cows on some piece of property in the West that you lease to cattlemen for their herds does not make you "a rancher", as Glenn likes to call himself.  I would also like to suggest that he perhaps get out of his comfortable chair in his corporate offices and go meet with these people personally and analyze the situation for himself, instead of casting aspersions from his ivory tower.  OK, I've vented my anger over his insulting interview, and now I feel better.

2 Timothy 2:14    "Remind them of these things, and charge them before God not to quarrel about words, which does no good, but only ruins the hearers."
Posted by Pam Kohler at 7:00 AM