This Empire Will Succeed or Fail Based On Its Moral Foundation ... And It's Not Looking Good

I ran across a fascinating article on TheTruthWins.com which provided 100 facts about the moral collapse of the United States.  As a Christian, I would dare say that I am not only more aware of our debasement, as well as being bothered by it more.  I won't overwhelm you with all the facts, but here are a few that I have to admit shocked me: 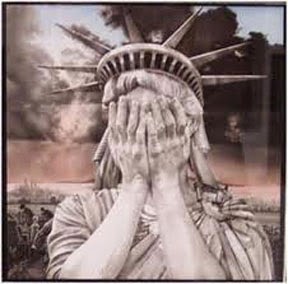 • Approximately one-third of the entire population of the United States (110 million people) currently has a sexually transmitted disease according to the Centers for Disease Control and Prevention.
•  The United States has the highest teen pregnancy rate in the entire industrialized world.
•  There are 106,216 registered sex offenders in the state of California alone.
•   60 percent of male sex abuse victims and 80 percent of female sex abuse victims “are abused by someone known to the child or the child’s family.”
•  70 percent of all men in the 18 to 24-year-old age bracket visit at least one adult website each month.
•  Law enforcement officials estimate that about 600,000 Americans and about 65,000 Canadians are trading dirty child pictures online.
•  It has been estimated that 89 percent of all pornography is produced in the United States.
•  At this point, approximately one out of every three children in the United States lives in a home without a father.
•  The number of American babies killed by abortion each year is roughly equal to the number of U.S. military deaths that have occurred in all of the wars that the United States has ever been involved in combined.
•  During 2012, more than 85,000 military veterans were formally treated for sexual abuse that they suffered while serving in the U.S. military.
•  The number of active members of the U.S. military that kill themselves each year now exceeds the number that are dying on the battlefield.
•  Right now, there are 70 million Americans that are on mind-altering drugs of one form or another.
•  Without strong families, our young people are constantly in search of an identity.  According to the FBI, there are now more than 1.4 million gang members involved in the 33,000 active criminal gangs in the United States.
•   66 percent of all U.S. adults believe that religion is “losing its influence on American life”.
•  According to LifeWay Research, 46 percent of all Americans never even think about whether they will go to heaven or not.
This was just a random sampling of how we've lost our moral way.  But it doesn't take a genius to see where we have gone astray.  Sex is viewed as convenient, dirty and exploitive.  Human life is disposable and expendable.  Life is not esteemed; our society would rather alter their mind or kill themselves than feel the pain.  The family unit has been decimated and is no longer a strong support system.  Faith in something other than ourselves is not evident.  We have become our own gods.  But how did we get this way?
First of all, we are not the first nation or empire to suffer this decline.  We all learned about "the fall of the Roman Empire" in school -- that's when our education system actually thought lessons could be learned from studying history.  And we are aware that our nation has recently been compared to this once great world power.  It's not hard to see why.
Novelguide.com provides an exemplary thesis on Moral Decline and its effect on the collapse of nations.  The site states the obvious ... the citizens of both Rome and the U.S. "somehow ignored the moral fibers that once bound their nations together. They indulged in luxuries best defined as providing themselves an excess of possessions at the expense of the rudimentary needs of others; they allowed crime to abound, and they lost the sense of their responsibilities as citizens."  The premise is enlarged upon when you consider that both nations began losing their morality when they progressed from Affluence to Selfishness.  Greed was a natural by-product.  And what was the propelling force of that greed?  Money!
Just as in Rome, wealth has divided our society into classes:  "The rich have ignored the lower class's economic problems, or simply detest the poor, because they feel that they are a national burden. The poor detest the rich because they feel that it is the rich that have forced them into poverty."
But it is not only wealth that has helped us slide into moral decay.  Like Rome, we have become desensitized to crime and violence.  We have become short-sighted, and care only about our own selfish welfare, instead of being a caretaker of the nation for future generations.  And we have failed to adequately protect ourselves against enemies who seek to dethrone us.
Finally, just like Rome, this nation has become smug in our luxury and comfortable in our apathy.  We no longer have a strong work ethic, revere knowledge, or encourage uniqueness.  When you think about it, what a very short time it took for us to reach extraordinary heights, and how rapidly we are free-falling into collapse.  I fear that future generations will only know how great we once were through legends and stories.  God have mercy on us and pull us from the fire!

1 Timothy 6:9   "But those who desire to be rich fall into temptation, into a snare, into many senseless and harmful desires that plunge people into ruin and destruction."
Posted by Pam Kohler at 7:00 AM