Excuse me, while I give myself a pep talk.  It's always my intention when I sit down to write these posts, to give you my humble and honest opinion of what the world looks likes to me, the average American woman.  But I have to confess that I'm not sure if what I am seeing is real or manufactured; what is the truth these days?
Is there a real possibility of a world-wide Ebola outbreak -- or is this just hype to prepare us for a global vaccination program?  Is the insane continuation of winter snow storms a product of natural climate change; a cycle that the earth has seen before --- or is it man-made with the admitted weather manipulation via drones?  What is the real reason we have troops on the ground in Poland?  Is Russia responsible for the unrest in Ukraine, or are we behind the scenes, pulling the puppet strings?  Were Cliven Bundy's recent comments about slavery delivered from a racist's heart, or were words added to his remarks and then quoted out of context?
Folks, I've just barely scratched the surface of all the news stories and events that are hurled at us each and every day!  Never mind the predictions of massive earthquakes and tsunamis from the Ring of Fire; the Vatican exploring extra-terrestrial life; Canadian aborted babies being burned in an Oregon energy facility; and Russia, China and North Korea all flexing their muscles .... it's enough to send me scrambling to pull the covers over my head!
How do you cope?  I can certainly understand those who are so overwhelmed or frightened that they just can't face it; or those who are on their knees in constant prayer.  But whether you see these headlines forecast in the prophecies of the Bible, or have no expectations beyond your short time on this earth, we share the bond of being concerned, observant human beings.  We know that these are unstable times, and we have no guarantee that we will traverse these troubled waters unscathed.  In fact,  everything is going "global", so it's pretty much assured that these big events will sooner or later affect us. 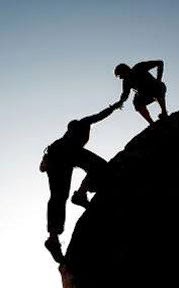 I realize that we -- as single individuals -- cannot effect global events; but we can effect our immediate surroundings, right?  I just keep thinking about the people in my life who are just now realizing that they can no longer avoid the possibility of coming chaos.  I see it in their faces, and hear it in their voices.  They had hoped that I would be proved wrong, but the reality of the decaying world is staring them straight in the face.  And while they couldn't deal with their fears two, four, six years ago; they now realize that they will be forced to face them... and they are behind everyone else!  Which leads to more paralyzing fear.
Perhaps the best thing we can do, not only for ourselves, but for someone else, is to help them forward.  Approach them with calmness and confidence, letting them know that we would like to put an arm around their shoulder, hold their hand, and ease them into this scary, new world.  Because you and I both know that it is coming.  We have to help them get ready, both physically and spiritually.  There will always be those who will resist to the very end, but I venture that there are far more that just need encouragement to take that step they've avoided for so long.  You remember what it was like, right?  That first step is terrifying, but as we support and embolden them, we will not only be inspiring a fellow man or woman, but we will be strengthening our own mind, body and spirit.  In the end, that is the best we can do for all concerned.

Romans 15:1    "We who are strong have an obligation to bear with the failings of the weak, and not to please ourselves."