The Battle Over Bundy

In regards to the ongoing theatrics at the Bundy Ranch in Nevada, there has been a barrage of accusations among a wide spectrum of Americans, all who claim that they believe in freedom, liberty and limited government.  While the different camps seem to agree that the federal government over-reached in its armed reaction to Mr. Bundy's refusal to pay grazing fees, they are world's apart on the aftermath of his standoff.
Some, like Glenn Beck, affirm that Bundy and his supporters are fomenting violence; while others such as Alex Jones, claim they were on the ground in Nevada and there was a concerted effort to remain nonviolent and follow the path of civil disobedience.  And now the name-calling has begun... and the attempts to discredit Bundy as a racist. 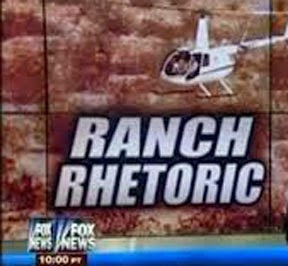 I was amazed (and alarmed, actually) that the Beck camp was so quick to denounce Bundy as a racial bigot, due to his comments to the New York Times on the state of the black race.  Did he express his position eloquently?  No.  Was the use of the word "Negro" outdated?  Of course.  Yet it was far from inflammatory.  Having known quite a few Western ranchers, I can tell you that they are not current in our culture's slang or euphemisms.  I'm pretty sure, that to Mr. Bundy, "Negro" was a polite term that he has used his whole life.  To make him out to be something he is not, is not only reckless, but unconscionable.
And who among us has not decried the current Welfare system as a new form of slavery?  It restricts the freedoms of all races to pursue life, liberty and happiness, as their Creator designed them.  After reading the NY Times interview, it appears to me that Mr. Bundy is a religious man, and is taking his moment in the spotlight to denounce the systems that are killing the human spirit.  It is his naiveté and lack of sophistication when dealing with the news media that kept him from filtering his thoughts and comments.  On the surface, there is nothing wrong with that --- it's kind of nice to hear frank, honest and sincere statements.  Remember, he doesn't have a high-paid publicist managing his every word.  Bet he'll think twice before giving his opinion on anything other than his struggle with the BLM.
But to all those who have come out to denounce this man and his cause ... have you given any thought to the idea that this interview might have been orchestrated to do just that?  To cast him in a despicable light, and therefore give rise to disagreements and cat-fights between those who basically agree on the foundation of his fight?  Do you realize that the focus has now been taken off the government and transferred to some ridiculous and overblown comments; and that by fighting among yourselves, you are tearing down the very fabric of your righteous argument?   (And is it only me, but does Beck seem to be digging a deeper hole for himself by trying to protect his original misguided impression of the Bundy affair?  And just who is he relying on for his information?  They don't seem to have a clear understanding of the real picture).
Whatever is going on behind the scenes, it smells rotten to me.  Politicians, who just days before, saw this as a constitutional fight, are now distancing themselves from Mr. Bundy's uneducated comments.  Far more provocative and incendiary comments have been made in the past by such real racial haters as Shabazz of the Black Panthers, yet some behind-the-times remarks by a plain, unpretentious rancher threaten to nullify one of the most important events in our modern history.  Think this is all accidental?  Keep your eye on what matters, and don't get fooled by the shell game.

Isaiah 32:7    "As for the scoundrel—his devices are evil; he plans wicked schemes to ruin the poor with lying words, even when the plea of the needy is right."