Rural vs Urban: The Divide Grows; and Who Is Responsible?

I was interested in reading an article in the Wall Street Journal, titled "City vs. Country: How Where We Live Deepens the Nation's Political Divide" .... that is, until I read the subtle bias in how the reporters portrayed each demographic.
It was a compelling concept; take a poll and contrast a small rural town in Missouri with the big metropolis of Kansas City, just a couple hours away.  You would expect to find that the poll showed differences in cultural values, shopping preferences, and job opportunities, for example.  But it was the way in which the poll results seemed to imply that city dwellers were more enlightened and more sophisticated than their country cousins that rubbed me the wrong way.  And, of course, according to the article, that narrative would also seem to represent the difference between Democrats and Republicans. 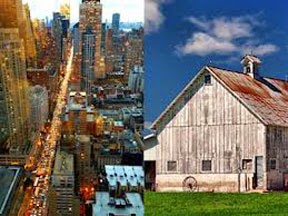 Let me illustrate just how each group was depicted.  The citizens of El Dorado Springs, Missouri were described as older, nearly 100% white and overwhelmingly Republican; typical of small-town America.  The owner of the nicest restaurant in town doesn't serve alcohol, because he doesn't want to offend his pastor.  Public schools don't schedule events on Wednesday evenings, so as not to conflict with the town churches' Bible Study times.
Those who lived in Kansas City were more ethnically diverse and religion was not as important.  That seems to be a fair statement.  But, the stereotype for the rural community seemed a little exaggerated.  (I wonder how long it took them to find a town that exhibited the characteristics they hate so much?)
I also found it a little transparent that one pollster decided to compare how Democratic presidential candidates fared in counties with the upscale Whole Foods organic grocery chain, versus those counties that included a Cracker Barrel, which he made sure to point out, served "chicken and dumplings."  Subtle, but conspicuous, don't you think?  But I know for a fact that big cities that have Whole Foods stores also have Cracker Barrel restaurants.  And rural citizens eat a whole lot more organically than many of their city counterparts;  they eat straight from their gardens and aren't tempted by all the high calories and processed content of fast food chains.
Of course, social issues like abortion, school prayer, and same-sex marriage were seen in a negative light, and characteristic of rural voters who supported Republican candidates.  The small-town church pastor in El Dorado Springs who advocates the Biblical view on these issues is portrayed as narrow-minded even though he states that "We're a church that does embrace people and we love people regardless of their circumstances."  On the other hand, at the Country Club Congregational United Church of Christ (that's its real name!) in Kansas City, there is a rainbow flag that welcomes and affirms all people, regardless of their sexual orientation, and sees these issues as "social justice" matters that need to be addressed politically.
This same church resides in a neighborhood with boutique shops; an Italian market that sells imported coffee beans and pasta; and a toy store that sells a kit to conduct solar experiments.  The article reveals that El Dorado Springs has a BBQ restaurant called the Rusty Jug that is decorated like an old-West saloon and serves deep-fried ribs and deep-fried potato salad.  Starting to get the picture?  Anything in small-town America is quaint, provincial or unfashionable; everything in Urban areas is advanced, contemporary and clearly more preferable.
And according to the WSJ, the various polls indicate that small town America is forced to shop at Dollar General, while their counterparts in Big City USA have options such as Apple stores, J. Crew and Williams-Sonoma.  There are more job opportunities, more conveniences, and more entertainment options in urban areas.  And I would agree with that.  There is less tolerance, less diversity, and less progress in rural communities.  Translation:  These people vote conservatively and the culture suffers.
Maybe I'm reading too much into the research outlined in this article.  But I couldn't help but feel that all those poll results were meant to convey that socially progressive urbanites that voted Democratic lived better lives than Republican voters who suffered from their backwards, prejudiced, and deprived lifestyles.  I resent the simplification, generalization, and stereotyping.
Having lived in both demographics, I will concur that we, who live in rural areas, lack certain amenities.  Yes, I have to drive 45 minutes to go to the movies or to find a Starbucks, and there's not a good bookstore within 100 miles.  But I get better and more personal medical care; I love that Church and Faith take priority over the latest social trend; and I love that I am surrounded by "real" people instead of the shallow, superficial folks that I endured for years.  And you know what?  Party politics doesn't really play a role.   Here, in the sticks, we may not be "cool", and we most definitely love "our God and our guns" -- but I wouldn't want to live anywhere else... even if the Wall Street Journal and all its polls, surveys and market research indicates otherwise.  Besides, I thought diversity and tolerance was the name of the game, right?
Didn't God make us all different; yet we are all made in His image?  Aren't we supposed to accept our differences, instead of encouraged to regard each other with contempt?  What's the real purpose of publishing poll results like these (which can easily be manipulated and distorted)?  Who gains by continuing the divide in morals, values, lifestyles and opinions?  It isn't the individuals in the city or the people in the rural communities!  As usual, it all comes down to power, arrogance, and selfishness. If only we, as individuals, could love each other as we were designed to, then the ones pulling the puppet strings could not win.  Please, Father God, help us to see each other as you see us.  It's so simple!

Hebrews 12:14    "Strive for peace with everyone, and for the holiness without which no one will see the Lord."