Why Is "God's Not Dead" Such A Surprise?

I find it amusing that the Entertainment Industry continues to be flummoxed over the success of faith-based movies.  The latest to mystify and bewilder the Hollywood crowd is a small Indie film titled, "God's Not Dead."  The plot of the movie is one that is being played out on college campuses across the breadth of our land.
The official synopsis lays out the looming test that every Christian will soon face ... Present-day college freshman and devout Christian, Josh Wheaton (Shane Harper), finds his faith challenged on his first day of Philosophy class by the dogmatic and argumentative Professor Radisson (Kevin Sorbo). 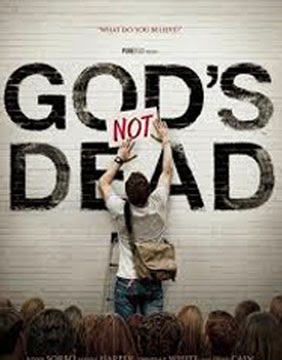 Radisson begins class by informing students that they will need to disavow, in writing, the existence of God on that first day, or face a failing grade. As other students in the class begin scribbling the words “God Is Dead” on pieces of paper as instructed, Josh find himself at a crossroads, having to choose between his faith and his future.
Josh offers a nervous refusal, provoking an irate reaction from his smug professor. Radisson assigns him a daunting task: if Josh will not admit that “God Is Dead,” he must prove God’s existence by presenting well-researched, intellectual arguments and evidence over the course of the semester, and engage Radisson in a head-to-head debate in front of the class. If Josh fails to convince his classmates of God’s existence, he will fail the course and hinder his lofty academic goals.
With almost no one in his corner, Josh wonders if he can really fight for what he believes. Can he actually prove the existence of God? Wouldn’t it just be easier just to write “God Is Dead” and put the whole incident behind him?
GOD’S NOT DEAD weaves together multiple stories of faith, doubt and disbelief, culminating in a dramatic call to action. The film will educate, entertain, and inspire moviegoers to explore what they really believe about God, igniting important conversations and life-changing decisions. The movie asks each of us to answer the question, "How far would you go to defend your faith?"
I watched the trailer of this movie and I have to say it got me so excited that I wanted to drive the 2 hours to the closest theatre that was showing it.  If you live in a larger city, then it's more likely that you were one of the only 784 theatres chosen to open the film last weekend.  This low-budget faith-filled movie came in at #4 at the box office, making $8.5 million, far surpassing its budget.  And it did it without all the hype for the #1 movie, Divergent, with its $85 million budget and grossing $56 million on the first weekend.  It will be interesting to see how things shake out this weekend.
While these numbers are all impressive, it is still the reaction of the Hollywood money-makers that astounds me.  It's just another example of how little they know the Christian audience.  They don't bother to take our tastes and preferences into account, let alone our buying power when it comes to ticket sales.  And we know "genuine" when we see it.  I am anxious to see how the big-budget Noah fares next weekend.  I can almost guarantee that if Hollywood tries to cram anything but the truth down our throats, the Christian audience will not go for it.  We just might see David slay Goliath again!
As The Blaze reported, one of the stars of the film, Kevin Sorbo, plays the non-believing Professor Radisson. A Christian, Sorbo is quoted as saying he hopes the film shows skeptics that “there might be something greater out there.”  He is hopeful that the film will appeal to those who might question the existence of God and serve as a catalyst for the discovery of faith.  As for atheist activists who sometimes react negatively to projects like “God’s Not Dead,” Sorbo believes their responses are often times driven by fear. “I think they’re fearful and [believe] that there must be something out there,” he said of vocal activists. “I don’t think I’ve ever gotten angry over something I don’t believe in. It’s almost weird to me.”
It certainly appears to be creating a lot of dialogue, as evidenced by the over 3000 comments on the news that this movie was such an unexpected success.  Most of them were faith-abiding Christians that applauded the makers of this movie.  And as usual, there were the God-haters who can't conceive that there is any other god than themselves.  They spew their denunciation of the Lord in vile rants and abuse their own Maker.
I'm always interested in discovering the tone of the conversation, and I very rarely feel the desire to respond to any of these comments.  But there was one remark that was presented in civil language that I would like to counter.  It read, I have no problem with the possibility that some type of advanced intelligence may have been the cause of the universe coming into existence. It is thinking that a book written by bronze-age men who knew absolutely nothing about the world has any validity at all that baffles me. Just answer one question and don't use the phrase "the bible says" to answer it. Why do you believe the bible is true?
Here's what I would say to that confused person .... "I believe the Bible is true because I have received confirmation through experiences in my life that I was pursued and purposed by a Force that calls me His own.  That Force is Jesus Christ who has revealed my need for a Savior from the sins of my flesh.  He is in the process of cutting away the prideful and selfish portions of my heart so that I might dwell with Him in His future, eternal Kingdom.  I believe the Bible is true because I don't believe in the temptations of this world or the Power that rules it.  I believe in the God of the Bible because He has revealed Himself to me through His Son, Jesus Christ, and I believe every word in "that book" to be true.  I would like to invite you to consider searching for Him yourself."
In closing, wouldn't it be just like our God to use this little independent film to start a spark of faith that sweeps the land like a prairie fire?  Go see the movie and kindle the flame.