How Does The War In Afghanistan Relate To A Popular Actor's Death?

I cannot say for sure, but there appears to be a long line of dots that connect these two events.  I remember a vague conversation three years ago with a returning vet who stated that the opium and poppy trade was one of the few ways the Afghanis had of supporting themselves, and the hint that part of his job had been to patrol and protect the native industry.
Then I started running across headlines like this:  One Million Deaths From Afghan Heroin; Russia Lashes Out At NATO for Protecting Afghan Drug Production; and Drug War?  U.S. Occupation Leads To All-Time High Heroin Production.
These articles make the outrageous allegations that the U.S. government has protected drug operations; that Big American banks launder money for the various drug cartels; and even that the drug trade was responsible for keeping our economic system afloat during the 2008 financial crisis!  Yet, would you be willing to refute these claims? 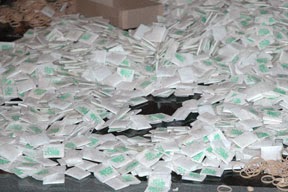 The overdose death this past weekend of a talented film actor (Philip Seymour Hoffman) has shined the light on the dirty little secret that heroin addiction has become an epidemic in this country.  Various drug treatment facilities are reporting record numbers of deaths from heroin overdose.  Dr. Joseph Lee, of Hazelden Treatment Center, has seen it firsthand among the youth; almost half of the patients are addicted to opiates, up from 10 percent 10 years ago.  From 10% to 50% in ten years... let those statistics and that timeline sink into your brain.
Then listen to the experts tell you how this addiction is accelerated ...  the path to addiction often starts innocently, with a prescription for Percocet, Vicodin or other opiates.  Scott Hesseltine, operations director at Hazelden Treatment Center, said the move from opiate addiction into full-blown heroin addiction can be very fast. Someone can start taking medicine for a toothache and become addicted to the pain medication. When the medications are gone, some turn to heroin, which is easier to get and cheaper.  Small packages of heroin can sell for as little as $6 on the street.  I have read articles from law enforcement agencies in Minnesota and Vermont, and virtually nationwide, proclaiming the upsurge in heroin addiction.
And in New York, where Mr. Hoffman was found with a needle still in his arm and packets of heroin strung about his room, heroin seizures in New York State are up 67 percent over the last four years, according to the DEA.  Last year, the agency’s New York office seized 144 kilograms of heroin, nearly 20 percent of its seizures nationwide, valued at roughly $43 million. One recent raid, in the Bronx last week, netted 33 pounds of heroin and hundreds of thousands of branded bags.
So, what has caused this epidemic of heroin abuse?  Some lay the blame on efforts to drive down abuse of prescription medications, saying as pills become more difficult to access, there is a shift to the black market and heroin.  But isn't that ignoring the real root of the problem?  Shouldn't we be focusing on why there is such a superabundance of heroin?  The website Global Research released a report in which they stated, "The cultivation of opium poppy in Afghanistan—a nation under the military control of US and NATO forces for more than twelve years—has risen to an all-time high, according to the 2013 Afghanistan Opium Survey released by the United Nations."  According to the report, cultivation of poppy across the war-torn nation rose 36 per cent in 2013 and total opium production amounted to 5,500 tons, up by almost a half since 2012. 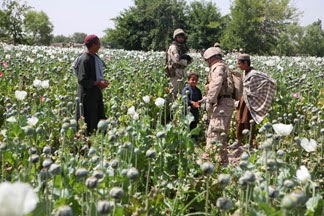 The New York Times reports that for years, American officials have struggled to curb Afghanistan’s opium industry, rewriting strategy every few seasons and pouring in more than $6 billion over the past decade to combat the poppies that help finance the insurgency and fuel corruption.  And while Global Research acknowledges that the opium industry is well known to help fuel the insurgency against US and NATO military forces, most opium farmers in Afghanistan continue to say that it is simply the only way they can make a living.  Yet despite having spent billions on eradication efforts in the country, the U.S. military has allowed poppy cultivation to continue in order to appease farmers and government officials involved with the drug trade who might otherwise turn against the Afghan Karzai government in Kabul. Fueling both sides, in fact, the opium and heroin industry is both a product of the war and an essential source for continued conflict.
Just consider this explanation of the opium industry in Afghanistan as presented by Wikipedia:  Afghanistan has been the greatest illicit opium producer in the entire world, ahead of Burma (Myanmar), the "Golden Triangle", and Latin America since 1992, excluding the year 2001. Afghanistan is the main producer of opium in the "Golden Crescent". Opium production in Afghanistan has been on the rise since U.S. occupation started in 2001. Based on UN data, there has been more opium poppy cultivation in each of the past four growing seasons (2004–2007) than in any one year during Taliban rule. Also, more land is now used for opium in Afghanistan than for coca cultivation in Latin America. In 2007, 92% of the non-pharmaceutical-grade opiates on the world market originated in Afghanistan. This amounts to an export value of about $4 billion, with a quarter being earned by opium farmers and the rest going to district officials, insurgents, warlords, and drug traffickers.  In the seven years (1994–2000) prior to a Taliban opium ban, the Afghan farmers' share of gross income from opium was divided among 200,000 families. In addition to opiates, Afghanistan is also the largest producer of cannabis (mostly as hashish) in the world. [These statistics were formulated by the UN Office on Drugs and Crime].
I will grant you that it's a long way from the poppy fields in Afghanistan to an actor/heroin addict's apartment in New York, but there is a direct correlation between the opium industry in that country and the addiction crisis that is sweeping our country.  The CDC has classified drug overdose as an epidemic, and statistics are showing that deaths by overdose (driven by the prescription opiates) have eclipsed death by car accidents in this country.
On one side of the world, you have poor farmers and the seemingly unbreakable allure of poppy profits; and on the other side of the world, there are affluent Americans who seek new (and deadly) highs to escape the pain of their existence.  They have converged, we are now seeing an epidemic of devastation sweeping our land.  We are all familiar with the ravages of War ... death, destruction and despair.  Now, we can add one more element: addiction.

1 Corinthians 6:19-20    "Or do you not know that your body is a temple of the Holy Spirit within you, whom you have from God? You are not your own, for you were bought with a price. So glorify God in your body."
Posted by Pam Kohler at 7:00 AM

Email ThisBlogThis!Share to TwitterShare to FacebookShare to Pinterest
Labels: Health Issues, Our Culture.