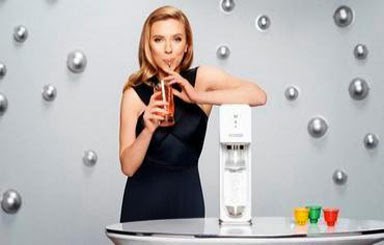 If you are paying attention to the Culture Wars, then you've most likely heard about the flak that actress Scarlett Johansson is receiving for representing the company SodaStream.  Why should anyone care about a Hollywood starlet advertising a machine that turns ordinary tap water into carbonated water and soft drinks, you might ask?  It's all about discrediting any attempt to bring peace to the Israeli/Palestinian problem.  Let me explain the story behind this cause célébre.
Ms. Johansson has long been the darling of an organization called Oxfam; indeed, she served as their global ambassador for the last eight years.  Oxfam is an international confederation of 17 organizations working in approximately 90 countries worldwide to find solutions to poverty and what it considers as injustice around the world.  Their official mission statement reads:  we work with people living in poverty striving to exercise their human rights, assert their dignity as full citizens and take control of their lives...that is unless you happen to be doing business in what the Left calls "the Isaraeli-occupied West Bank."
The controversy centers around a SodaStream factory, just outside Jerusalem.  It's about a 20-minute ride from Jerusalem and it's become the target of the BDS movement, which stands for "boycott, divestment, and sanctions."  This BDS movement promotes targeting Israel in economic ways "until it complies with international law and Palestinian rights as initiated by Palestinian civil society in 2005, and is coordinated by the Palestinian BDS National Committee (BNC), established in 2007.  BDS is a strategy that allows people of conscience to play an effective role in the Palestinian struggle for justice."
According to an article printed by Christian Broadcast Network site, Oxfam claims, "…businesses such as SodaStream…further the ongoing poverty…of the Palestinian communities that we work to support."  But here's the hypocrisy of that statement:  Oxfam also claims to champion the exercise of human rights, and allowing citizens to assert their dignity as full citizens and take control of their lives (see above mission statement).  SodaStream is doing just that!
Here are the facts, as reported by The Jerusalem Post:  At SodaStream, a third of the 1,300 employees in its West Bank factory were Palestinians, another 400 to 450 were Israeli Arabs and the remainder were Jews. The article said that the factory is one of six in Israel, and one of 25 such facilities worldwide.  So, if Oxfam is so concerned about the poverty issue at this SodaStream factory, and the dignity of the workers, why didn't it ask the Palestinian workers how they feel about working for this "offensive" company.  That's exactly what The International Business Times did, and here are some of the responses from the workers themselves: 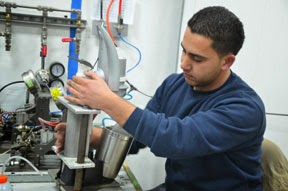 Palestinian Nabil Basharat, 40, from a village near Ramallah, has worked for SodaStream for four years and is now a shift manager. He supports his wife and six children on an income he says is high by both Palestinian and Israeli standards. About the boycott, he said it came down to protecting the workers’ ability to earn a fair wage:  “We understand their [BDS and Oxfam’s] opinion, but they need to understand what the factory gives the Palestinian workers, and there are a lot of factories in this area doing the same thing.”
Or there was the unemployed youth near Qalandiya checkpoint, who gave his name as Yasser, and said the minimum wage in the Palestinian Authority made it nearly impossible to live. “We need more factories like SodaStream. It’s hard to get a job there,” he said.
Another employee, Ahmed Nasser explained why he works at SodaStream:  "To come and learn from this factory how to have peace. It's the best way to live together."  Sure seems like these workers have been given both dignity and control over their lives!
Which is exactly why Scarlett Johansson refused to be bullied and resigned from her association with Oxfam.  "I remain a supporter of economic cooperation and social interaction between a democratic Israel and Palestine," said Johansson. "SodaStream is a company that is not only committed to the environment but to building a bridge to peace between Israel and Palestine, supporting neighbors working alongside each other, receiving equal pay, equal benefits and equal rights."
SodaStream CEO Daniel Birnbaum takes that statement one step further.  "SodaStream promotes Biblical peace. In Hebrew from the book of Isaiah, They shall transform their swords into plowshares. That's what we do here.  This factory used to be a munitions factory of the Israel military and we converted it into a food factory. So instead of making weapons, bomb shells, we make soda makers and we don't want to make it on our own.  We want to make it with our Palestinian brothers; side by side with Jews.  And every day we're proving that peace can happen, and peace will happen in the Middle East."
So, tell me, which organization is truly promoting dignity, human rights, social justice, and the love of mankind for each other?

Deuteronomy 15:11   For there will never cease to be poor in the land. Therefore I command you, ‘You shall open wide your hand to your brother, to the needy and to the poor, in your land.’