Chris Kyle: The Character Of A Man 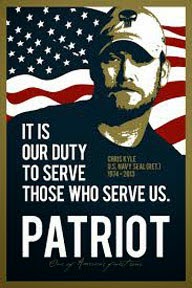 To Jill and Bo, Jon, Bridgette, Kristen, Ron:  You all helped Chris be more than the legend to us.  Thank you for sharing your memories.  And we celebrate these new friendships in his honor.  And to Wayne, Deby, and Jeff:  we hope this weekend showed you how much all of us respect the memory of your son and brother.  Thank you for letting us be a part of it.