What's Really Behind the MyRA Plan?

You didn't really think you were going to be able to keep your retirement plan all to yourself, did you?  What makes you think that you are responsible enough to plan for your golden years?  Of course, the developments in our national economy, the bailouts, and the gargantuan spending habits of Congress have done everything they could to strip you of your hard-earned savings.
Now, we hear of a new plan, as presented by the President in his recent State of the Union address.  It's called MyRA.  For several years now, the financial experts at ZeroHedge have been warning us that when the government runs out of money, or they face a drying up in interest for its debt, they will come for the $19.4 trillion in American’s retirement accounts.  Of course, it will come under the guise of "helping you manage your retirement."
If you need further convincing, consider this statement that came from Bloomberg:  The U.S. Consumer Financial Protection Bureau is weighing whether it should take on a role in helping Americans manage the $19.4 trillion they have put into retirement savings, a move that would be the agency’s first foray into consumer investments.  "That's one of the things we’ve been exploring and are interested in, in terms of whether, and what, authority we have,” Bureau Director Richard Cordray said in an interview.
Naturally, he didn't provide any further details.  Just testing the waters perhaps?  Supposedly, the Bureau is worried that aging Baby Boomers, who are now entering retirement might fall prey to financial scammers.  Compassionate, aren't they? 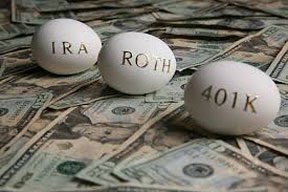 But that brings us back to the President's plan, MyRA.  With foreigners not buying as many Treasuries and the Fed tapering, the US government has been searching for new buyers of its unwanted debt. And this is where the new MyRA program comes in.  Touted as a "new way" to save for retirement, you can actually only invest in government-approved investments—like Treasuries—which probably won’t even come close to keeping up with the real rate of inflation.  All indications are that the MyRA will essentially be a Roth IRA, with one huge difference: it can only invest in the aforementioned government savings bonds.  What it really amounts to is the funneling of our retirement savings to Treasury securities and bailing out the US government.
This "new way of saving" by buying Treasury bonds is not a good deal for the American investor.  As The Casey Report tells us, first of all, bonds neither guarantee a decent return nor protect people from losing their principal. In fact, with interest rates still near historic lows, buying bonds today and holding them for the long term virtually guarantees seniors will lose money.
Second, a bond is not a one-sided transaction. Whoever issues the bond is borrowing money from the buyer.  Do you really think the Government is going to pay back that loan?
And if you think that nationalization of retirement accounts is far-fetched, in just the past six years, it’s happened in some form in Argentina, Poland, Portugal, Hungary, and numerous other countries.  And here are some creative ways it could happen:

New Contribution Mandate: The government could mandate, for example, that 50% of new contributions to private retirement accounts must consist of “safe,” government-approved investments, like Treasury securities.
Forced Conversions: This is where a government will forcibly convert existing assets held in retirement accounts into so-called “safer” assets, such as government bonds. For example, if the US government forcibly converted 20% of the estimated $20 trillion in retirement assets (401k plans, IRAs, defined benefit and contribution plans, etc.), it would net them $4 trillion. Not a bad score, considering the national debt is north of $17 trillion.
Special Taxes: The government could look into levying special taxes on distributions from retirement, especially those deemed to be “excessively large.”

Pretty scary, huh?  So while none of these mandates were mentioned in the SOTU address, I would venture that the recommendation of MyRA is the first salvo.  Unfortunately, our golden years look like they could become tarnished.

2 Peter 2:15    "Forsaking the right way, they have gone astray. They have followed the way of Balaam, the son of Beor, who loved gain from wrongdoing..."