The Mexican Cartels and the Rise of Exorcisms

This story almost seems too preposterous to be real.  But the New York Daily News ran a story over the weekend that exorcisms are on the rise as a weapon against the ever-escalating violence of drug cartels.  Hard to believe?  The evidence is supposedly backed by priests who say the heightened frequency is fueled by the growing popularity of Santa Muerte (Saint Death), the favorite saint of narcotics syndicates and about 10 million followers around the world, an estimated 2 million of them in Mexico. 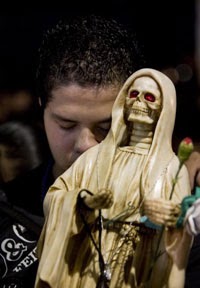 You might be tempted to write this Saint Death off as sensational and exaggerated, but consider these cases:  a follower in New Orleans built a public shrine in her honor. An actor in Albuquerque credits her with helping him land a role on the TV show “Breaking Bad.” She turns up routinely along the U.S.-Mexico border at safe houses, and is sighted on dashboards of cars used to smuggle methamphetamine through the southwest desert.
And although La Santa Muerte is quite popular in Mexio, don't think that she is worshipped primarily in the Latino culture.  The skeleton saint has found a robust and diverse following north of the border: immigrant small business owners, artists, gay activists and the poor, among others — many of them non-Latinos and not all involved with organized religion.
Andrew Chesnut is the author of Devoted to Death: Santa Muerte, the Skeleton Saint, and is the Bishop Walter F. Sullivan Chair in Catholic Studies at Virginia Commonwealth University.  He said, “Because you can ask her for anything, she has mass appeal and is now gaining a diverse group of followers throughout the U.S. and her growth has been extraordinary. She’s the ultimate multi-tasker.”
Law enforcement is well aware of the popularity of Saint Death.  U.S. Marshal Robert Almonte, whose jurisdiction is in West Texas, said he has testified about La Santa Muerte in at least five drug trafficking cases where her image aided prosecutors with convictions.  Since her popularity crosses cultures and borders, Altmonte has given workshops to law enforcement agencies on the cult of the saint.  “Criminals pray to La Santa Muerte to protect them from law enforcement,” he said. “But there are good people who pray to her who aren’t involved in any criminal activity so we have to be careful.”
Devotees say La Santa Muerte has helped them find love, find better jobs and launch careers.  An owner of a curio shop in Albuquerque, New Mexico said, “Most people who buy the stuff are regular people who just recently found out about her.  Some probably have no idea about her connection to that other world.”
"That other world" is the secret places of the drug cartels. Father Ernesto Caro knows first-hand how the patron Saint of Death has infiltrated the world of drugs.  One day, the person in the confessional was a killer for the Los Zetas cartel, Mexico's most heinous crime syndicate. His specialty was chopping people into pieces, while they were still alive.  "He said he smiled while he was doing it. He said he enjoyed it and that he was laughing," Caro, a priest and exorcist in Monterrey, told the Daily News. "He told me terrible things."  When Father Caro exorcised his first cartel member, three or four years ago at his parish in Monterrey, he looked into the man's eyes "and saw the devil," Caro said. Then the man "writhed on the floor like a snake," he said. 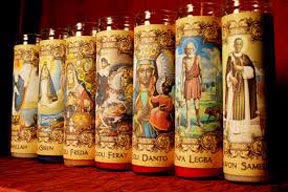 It is not surprising, then, that the Vatican has condemned Santa Muerte’s followers as a Satanic cult. Though the act of exorcism remains a church-sanctioned ritual, it is not often publicly discussed by the Holy See.  In Mexico, priests blame her cartel worshippers for bringing unprecedented acts of evil on ordinary citizens.  Exorcisms are particularly popular in outlying villages, where priests often celebrate weekly Mass to drive demons from tormented souls, experts say.
Regardless of whether or not you think this phenomenon is worthy of mention, you cannot ignore the very real influence this folk saint is having upon both the good and the wicked.  And neither do I think we should dismiss its popularity or practice.  Since 2006, cartel violence has spun out of control in Mexico, with as many as 80,000 people killed by warring drug gangs. The savagery has escalated to such an extent that in some areas decapitated, dismembered and disemboweled bodies are an everyday sight.  You might not think exorcism is the answer, but you can't ignore the words of Father Caro … "Evil is growing."

Deuteronomy 32:17   "They sacrificed to demons that were no gods, to gods they had never known, to new gods that had come recently, whom your fathers had never dreaded."

Email ThisBlogThis!Share to TwitterShare to FacebookShare to Pinterest
Labels: Out There, Social Commentary