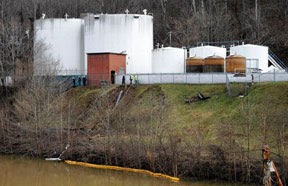 I must admit that I am deeply disturbed, on several fronts, by events surrounding the chemical spill in West Virginia that left 300,000 people around the city of Charleston without water.  According to an article in the LA Times, at least 7500 gallons of a "mysterious" coal-washing foaming agent, known as 4-methylcyclohexane methanol, or MCHM, cascaded past a containment area and poured into the Elk River, just upstream from a major water treatment plant.
Freedom Industries, the chemical company blamed for the spill, says a water line burst during last week's frigid temperatures, the ground beneath a storage tank froze, and some kind of object punctured a hole in its side, causing it to leak.
After residents noticed a licorice-like odor coming from the chemical company, inspectors soon arrived and discovered that not only had this company taken no action to stop the leak or report it to authorities, there are virtually no regulations governing inspection and maintenance of the storage tanks.  The governor of West Virginia issued an emergency do-not-use order, and residents couldn't use tap water to drink, bathe, brush teeth or wash dishes or clothes. Boiling it would do no good.
As you can imagine, bottled water supplies sold out in many areas within hours of the governor's edict.  The West Virginia National Guard brought in water tankers, and people lined up to fill containers with the precious liquid.  Day after day, residents went without showers as authorities scrambled to test the water to ensure it met the federal safety standard of less than one part per million of the contaminant.
Little is known about the possible health effects of MCHM, a solvent used to wash impurities from coal. For days after the spill, state officials were at a loss to explain to residents just what was in the stuff and just how dangerous it might be. Authorities said it was not lethal, but could cause vomiting, nausea and skin, eye and throat irritation.
Yet within 4 days of the spill, the Center for Disease Control advised residents that it was safe to resume consumption of the city's water.  And how did they make that determination?  Well, according to Richard Denison, a senior scientist at the Environmental Defense Fund, the CDC violated its own procedures by relying chiefly on a lab rat study by the chemical manufacturer to set the standard. He called the study, in which he said MCHM was fed to rats until they died, "crude," "very problematic" and based on "shaky science."  Not only should the chemical manufacturer's standards come into question, but the fact that the CDC would rely on the findings of the very manufacturer (who is being sued) to issue their "All OK" status on drinking the water.
Although Dr. Vikas Kapil, a senior CDC official, defended the standard as valid, he also added, "There are uncertainties, and there is very little information on this chemical." So do you think the CDC jumped the gun just a little bit?  And to add insult to injury, a mere 2 days after issuing the OK to resume drinking tap water, the West Virginia Department of Health and Human Resources issued an advisory for pregnant women based on the CDC's own guidelines that recommended "out of an abundance of caution" that "pregnant women drink bottled water until there are no longer detectable levels of 4-methylcyclohexane methanol, or MCHM, in the water distribution system."
To say that the CDC was negligent in this matter, is a gross understatement.  And yet, Fox News, in covering this incident, trots out their so-called "medical expert", who has the audacity to say, "We need to trust the CDC.  They have our best interests in mind."  Who are they kidding???
All you have to do is ask Brandy Russell, community director for the West Virginia March of Dimes, which fights against birth defects.  In an online ABC News article, she said, "Everyone is freaking out."  Since not much is known about the chemical, no one can guarantee that it won't harm a developing fetus.  And since MCHM was grandfathered in to the 1976 Toxic Substances Control Act, there are no laws requiring the industry to prove it is safe.  Yet, the CDC has said it believes water with levels of one part per million was safe to drink.  Would you trust them?
While there is a whirlwind of controversy surrounding this scary event -- and rightfully so -- one has to wonder what will be the end result.  Will anyone look into the industry and their safety standards?  Will anyone do more research on the chemical itself?  Will the CDC take a good hard look at their own practices and procedures regarding their mandate to protect public health and safety?
We are told to "trust the CDC" in all manner of our health ... vaccines, infectious diseases, environmental health; yet in this instance, all they seemed to disseminate was fear, confusion and mistrust.  So if this is their standard of operation, then I think I will simply rely on my own God-given common sense, thank you.