My Answer To A Millennial On The Subject Of Abortion

It has been 41 years now since the landmark decision by the United States Supreme Court on the issue of abortion.  Each year, on this date, I am saddened that our nation continues to kill unborn babies.  And then I am disgusted by the selfishness and the arrogance of women who persist in calling it a "women's rights" issue.
I was a sophomore in college the year that Roe v. Wade became the law of the land.  I saw many of my college friends take advantage of the new law, as it removed all responsibility from the carefree sex life they could now explore.  Little did I realize that my generation would be the beginning of a long and nightmarish road that would lead to 55,772,015 babies being sacrificed on the altar of personal convenience.  Mind you, that statistic belongs to last year's anniversary date.  At a rate of over 1.2 million abortions a year, the actual number as of today is probably closer to 57 million destroyed fetuses.
One would think that this number would be appalling to all women.  And, I personally, would hope that the young women of today would be more sensitive to this monstrous procedure.  But it appears not.  I am discouraged by a letter to the editor of her college newspaper by Katie Youmans, a co-ed at the University of Missouri.  In the letter, she applauds the generations of women who fought for her right to have an abortion. 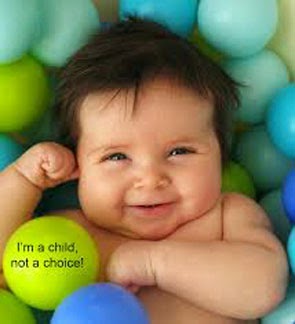 As she honors this 41st anniversary of Roe v. Wade, she says it has never felt more important to her, and she vows to continue the fight for what she calls "reproductive freedom."  First of all, to me this is kind of an oxymoron.  The very essence of "reproductive" is to be "procreative", or "the production of offspring by a sexual process."  That means something is actually produced; and that would be a baby, Katie!  There is more than one life involved here.  So where does "freedom" come into the picture?  Wouldn't your "freedom" be more appropriately called your "entitlement" or your "impunity", which means exemption from the punishment of having a baby (where have we heard that phrase before?) or freedom from the injurious consequences of an action -- namely, purposefully killing what you've produced?
Now, I realize, Katie, that you have no respect for those of us who were at the inception of this heinous law, but yet do not find it as liberating as you do.  And you will probably not believe me, but this law was never really about delivering girls from bad decisions.  Even the original complainants have reversed their opinion of abortion and claim they were duped into a false lawsuit, all for the real purpose of disguising population control as a social issue.  And subsequent generations have fallen for the same deception.  You claim that the issue of abortion is "interconnected with the spectrum of social justice issues" that you care about; including "poverty, racism, discrimination against immigrants, and the range of issues and systems of inequality that impact our ability to truly make the decisions that are best for ourselves, our families and our communities."
Katie, the social conversation about all these issues centers around "rights", and those who believe as you do, will say that you have the legal entitlement to act in a way that suits your personal needs, without interference by the government.  That's the problem with the modern concept of "rights".  You make it all about man's law; but there is a higher law, a moral one.  And in the 41 years since Roe v. Wade, the moral issue around abortion has been overshadowed by selfish desire, and I know you don't want to hear it, but God sees that as sin.
You even make the bold statement that you're here to stay and will continue the fight.  But, as one clever response to your letter-to-the-editor points out, "the great irony here is that your generation is killing future generations of people that would be like-minded."  You see, Katie, for your "cause" to continue, babies must be born to inflate your ranks.  And just what do you think those babies develop from?  Why, the very tissue you and your fellow abortion supporters would readily scrape from your wombs!
So, Katie, I pray that the veil will be lifted from your heart, and you will see abortion for what it is ... the intentional murder of innocent lives.  They are every bit a work of the Creator as you or I.  I am  sorry that my generation was the first to embrace this barbaric practice, and I pray that yours will be the last.

1 Corinthians 3:16-17    "Do you not know that you are God's temple and that God's Spirit dwells in you? If anyone destroys God's temple, God will destroy him. For God's temple is holy, and you are that temple."