Hold On To Your Hats For This One: Satan Wants To Come To Oklahoma!

When I first contemplated writing this post, PLW told me, "Don't get too fringe-y; you don't want to scare 'em".  But when I see something as blatant and in-your-face as I'm about to show you, my response has to be, "But they need to know."  So hang on to your hats (tin foil and otherwise)!
As preposterous as it sounds, what I'm about to tell you is surely a sign of the times ... the End Times, that is.  Even if you're not a Christian, you must confess the existence of Good vs Evil, right? And in case your local MSM affiliate isn't reporting this story, I think you should know that a New York-based Satanic Temple formally submitted its application to erect a 7-foot-tall statue of Satan that it wants to put at the Oklahoma state Capitol, in response to a Ten Commandments monument which was placed there in 2012.
You might be asking why the New York Satanists don't just mind their own business and keep their occult monuments on the East Coast.  Why inflict their evil designs upon the good folks of Oklahoma?  But, as a Christian, I already know the answer to that question:  Satan is in a cosmic chess match with God, and he just made his next move. 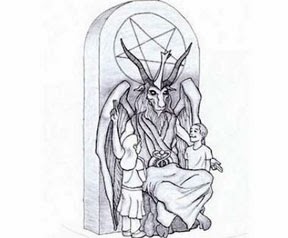 This artist's rendering depicts the statue, which features Baphomet, a goat-headed figure with horns, wings and a long beard; said to be used as a symbol of the occult.  That's putting it mildly -- the Baphomet has been adopted as the official symbol of the Church of Satan; in other words, Satan himself.  In the rendering, Satan is sitting in a pentagram-adorned throne with smiling children next to him.
It's important that you know the true significance of the pentagram.  Now, there are those easily deceived folks who will tell you that the pentagram is a symbol of a star encased in a circle, always with 5 points (one pointing upward), each having its own meaning. The upward point of the star is representative of the spirit. The other four points all represent an element; earth, air, fire, and water. All these things contibutite to life and are a part of each of us.  They will then naively (or not!) inform you that to wear a pentagram necklace or other form of jewelry, is to say you feel the connection with the elements and respect the earth.  Like I said ... they are easily deceived.
As Wikipedia reveals, the pentagram has been the object of various symbolisms:  In medieval Christian tradition, the pentagram could represent the five wounds of Jesus. In the Renaissance it came to be associated with magic and occultism, and is also found as a magic symbol in the folklore of early modern Germany (Drudenfuss). In modern use, it is sometimes used as representing the Seal of Solomon, and it has religious significance in various new religious movements (including certain forms of Neopaganism) as well as in occultism.
My understanding is that each of the five points of the star represents the five "I Will's" of Satan that are listed in Isaiah 14:  1)  I will ascend into heaven, 2) I will exalt my throne above the stars of God;  3) I will also sit on the mount of the congregation on the farthest sides of the north;  4) I will ascend above the heights of the clouds, and 5) I will be like the Most High.  Kind of makes sense why the Church of Satan would adopt this symbol right?
But to add to the absurdity (not to mention the blasphemy) of their plan to build this monument, the Satanic Temple group released a statement which said, in part, that the statue "will have a functional purpose as a chair where people of all ages may sit on the lap of Satan for inspiration and contemplation."  Furthermore, on its website, the Satanic Temple claims "Satan stands as the ultimate icon for the selfless revolt against tyranny, free & rational inquiry, and the responsible pursuit of happiness."
Lest you think that this whole premise is so ridiculous as to be dismissed, I wrote this post as a warning that Satanic belief systems are becoming more socially tolerated in this country.  In fact, The Truth Wins website recently reported that while Islam is the fastest growing major religion in the U.S., Wicca is growing at an even faster pace.  In fact, according to Wikipedia, Wicca experienced an average annual growth rate of 143 percent in the United States between 1990 and 2001.  I have personally heard from chaplains during my Wounded Warrior service that they are alarmed at the popularity of Wicca in the military.
So, while this whole idea of such an offensive statue being erected at a State Capitol might seem laughable, I think it would serve us to take it seriously ... very seriously.  While Oklahoma lawmakers have rejected the notion thus far, saying Satanists should not be given the same treatment as Christians,
only time will tell how this move on the cosmic chess board plays out.  I do not think it absurd to think that Christianity will continue to decline, nor that monuments like this actually do begin to be erected across the land.  When a nation removes God from its foundation -- from the classroom, the government, the military, and the family -- then what do we expect to be left with?
Our God made it pretty plain how He feels about us replacing Him ... "“You shall not make for yourself a carved image, or any likeness of anything that is in heaven above, or that is in the earth beneath, or that is in the water under the earth. You shall not bow down to them or serve them, for I the Lord your God am a jealous God, visiting the iniquity of the fathers on the children to the third and the fourth generation of those who hate me...".  There's your air, earth and water; He will soon show us His fire!