We Could Use Some "Common Sense" Today! 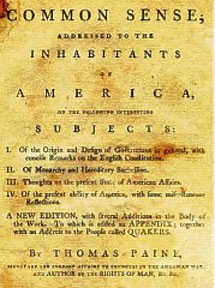 Exactly 238 years ago today, Thomas Paine published his extraordinary pamphlet Common Sense.  Paine was an English-American whom history has characterized as a political activist, author, political theorist and revolutionary (yes, it can be deemed a positive term).  His wildly popular pamphlet is largely credited with uniting average citizens and political leaders behind the idea of independence.  Through his able art of communication, he gifted a disparate group of freedom-lovers with a means of unifying a nation; out of which was born the American Revolution.
The pamphlet was so popular that it was read aloud at taverns and meeting places. General Washington had it read to all his troops, which at the time had surrounded the British army in Boston. In proportion to the population of the colonies at that time (2.5 million), it had the largest sale and circulation of any book published in American history.  It didn't hurt the popularity of Common Sense that Paine wrote it in a simple and straightforward style that the common man, whether literate or not, could understand.  Paine structured the pamphlet as if it were a sermon, and cited Biblical references in his argument for the cause of liberty and independence.
According to historian Robert Middlekauff, (a professor emeritus of colonial and early United States history at UC Berkeley), Common Sense became immensely popular because Paine appealed to widespread beliefs of the day. Monarchy, Paine said, was preposterous, and it had a heathenish origin. It was an institution of the devil.  He pointed to the Old Testament, where almost all kings had seduced the Israelites to worship idols instead of God.  Paine also denounced aristocracy (or the Elite, as they are known today), which together with monarchy were "two ancient tyrannies". They violated the laws of nature, human reason, and the "universal order of things", which began with God. That was, Middlekauff says, exactly what most Americans wanted to hear. He calls the Revolutionary generation "the children of the twice-born", because in their childhood they had experienced the Great Awakening, which, for the first time, had tied Americans together, transcending denominational and ethnic boundaries and giving them a sense of patriotism.
I daresay that, as a nation, we could stand to revisit some of the premises of Thomas Paine's Common Sense.  He argues that all men are equal at creation and, therefore, the distinction between kings and subjects is a false one.  I'm afraid that we've lost sight of that concept, as we see the various branches of government setting up one set of rules for themselves, and another for us common folk.  The following passage was written in regards to the British monarchy, but it doesn't take much imagination to see that it applies to our circumstances today:

In England a king hath little more to do than to make war and give away places; which in plain terms, is to impoverish the nation and set it together by the ears. A pretty business indeed for a man to be allowed eight hundred thousand sterling a year for, and worshipped into the bargain! Of more worth is one honest man to society and in the sight of God, than all the crowned ruffians that ever lived. 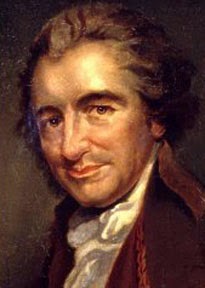 Paine goes on to say that whatever kind of government a new nation might adopt, they would do well to limit the power given to any one man or body; a concentration of such power would be dangerous, permitting him eventually to transcend any limitations placed upon him.
Paine's pamphlet went on to envision  a "Constitutional Charter" that would secure “freedom and property to all men, and… the free exercise of religion.”  Boy, could we use a dose of that kind of sentiment today!  But while I praise the influence and impact that Common Sense had on the events of its day, I must also acknowledge that except for a few radical thinkers, most of Americans remained undecided, or at worst, uneducated, about the state of affairs in the thirteen colonies.
As an ordinary, everyday citizen they had probably been impacted by the Stamp Act or Sugar Act.  They could feel the increasing pressure of tyranny, but still felt attached to the "system".  Most probably just wanted to pull the covers over their heads and wish it all away. For sure, no one wanted to take that first step in dissolving what they had become accustomed to.  So they continued to rely on false promises and smoke and mirrors; engulfed in their own inner turmoil, they felt conflicted over just what to do.  Sound familiar?
It took Thomas Paine's concise and concentrated rhetoric to stir the souls of the oppressed masses.  Through his writing, they were inspired to take a stand, and unite to make a commitment towards true freedom. So, I find it extremely paradoxical that in this day, when millions of us are technologically "plugged in", we cannot recognize the same threats of oppression and tyranny, and come together to stand for our rights and privileges as free men.  Perhaps it is still the common denominator of the Bible and a Great Awakening; that men who adhere to God's principles are the ones who are receiving "the message".
So on this distinguished anniversary, I think it is fitting that we come to realize that this one man was not single-handedly responsible for the fight for independence.  We must recognize his contribution to the community effort; an effort consisting of improbable and stunning accomplishments.  But we must also acknowledge that man, made in the image of his Creator, will always long for the freedom that is endowed to each of us.  There may be no Thomas Paine in sight, but the same Spirit that spoke to his soul, is speaking to ours today.  It's been 238 years, and we could use some Common Sense!

Romans 8:21    "That the creation itself will be set free from its bondage to corruption and obtain the freedom of the glory of the children of God."