Gates Memoir Should Make Us Tremble 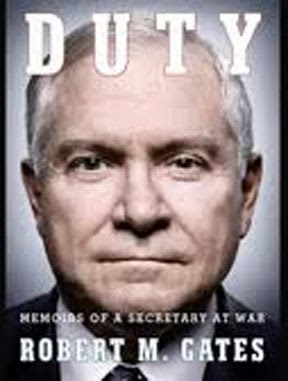 There has been a lot of media interest in Secretary of Defense Robert Gates's depiction of his years of service, titled Duty: Memoirs of a Secretary at War.  And rightfully so.  Anytime you hear that the President of the United States, who is Commander-in-Chief of our military forces, is uncomfortable around military leaders, and there is a feeling he is "suspicious of their motives”, then it casts at least a tiny doubt as to the state of our national security.
As the Commander-in-Chief; the person who exercises supreme operational command and control of our nation's military, neither the term "uncomfortable" nor "suspicious" should in anyway be applied.  Those two observations alone, should give every American pause as to the commitment and confidence the CIC has in our troops.
I will confess that I have not read the book, although I plan to.  For the time being, I am contemplating how I feel after watching a handful of recorded interviews with the Former Secretary of Defense, and reading an emotional excerpt from the book.  My overall impression is that, during the years of his tenure, Politics played a more important role than the welfare of our military, and "dysfunction" all too often described the actions of policymakers.
Don't get me wrong; I'm not writing this post to lay the blame at the feet of one man or one administration; there is enough criticism to go around.  I am just frustrated and disgusted at the seemingly egotistical posturing that has resulted in so many lost lives during two long, and still unsettled wars.  According to Gates, he not only had to wage war in Iraq and Afghanistan -- but in Washington, D.C., too!  Here is a telling exposition from the book:  "Such difficulties within the executive branch were nothing compared with the pain of dealing with Congress. Congress is best viewed from a distance—the farther the better—because up close, it is truly ugly. I saw most of Congress as uncivil, incompetent at fulfilling their basic constitutional responsibilities (such as timely appropriations), micromanagerial, parochial, hypocritical, egotistical, thin-skinned and prone to put self (and re-election) before country.
I was more or less continuously outraged by the parochial self-interest of all but a very few members of Congress. Any defense facility or contract in their district or state, no matter how superfluous or wasteful, was sacrosanct. I was constantly amazed and infuriated at the hypocrisy of those who most stridently attacked the Defense Department as inefficient and wasteful but fought tooth and nail to prevent any reduction in defense activities in their home state or district." 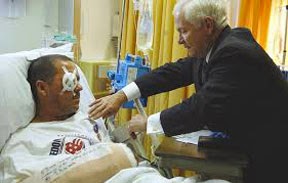 Perhaps we are too many generations away from Presidents (and members of Congress) who actually know what it is to serve in a war.  They haven't tasted the fear and the pain of death; nor do they know the selfless sacrifice and commitment of those who serve.  They (POTUS and Congress) only know how to serve their own self-interests.  So when technology advances to the point that all it takes is a button being pushed in DC to destroy a target half a world away, then perhaps war has become too much like a video game, and we lose perspective of the actual flesh and blood who pay for those decisions.  Gates says it best:  "My years at the Pentagon left me even more skeptical of systems analysis, computer models, game theories or doctrines that suggest that war is anything other than tragic, inefficient and uncertain."
And the tragedy comes from the fact that the shattered lives of soldiers and families, alike, are lost upon those who are elected to direct their service.  I have personally seen the effects of these decisions; double, triple and quadruple amputees; from men (who look like boys) that have barely begun shaving, yet have paid a price that will haunt them for the rest of their lives.  As the proud daughter of a WWII veteran, I thought I would never say this, but I honestly could not recommend that any child I love be encouraged to enlist in this military.  Yet, I will support that heroic decision, and I know they will continue to answer the call because they believe in something bigger than themselves.  Too bad the ones we elect to be at the helm don't feel the same way.
This book has been described as an "act of betrayal"towards the White House, but until I read the entire 600 pages myself, I am inclined to feel it is the troops that have suffered the greater breach of faith.

Asked by a young Afghanistan veteran, "Sir, what keeps you awake at night? Gates answered, "You do."  Robert Gates has chosen to be buried in Arlington National Cemetery, in Section 60, beside the service members who died in Iraq and Afghanistan.