If you haven't already been disgusted by this preposterous case, let me make your day.  Here are the facts, presented in a well-written article on RawStory.com:  16-year-old Ethan Couch of Fort Wort, TX, along with a group of friends, stole alcohol from a nearby Walmart.  They quickly left the scene of their crime in a pickup owned by Cleburne Sheet Metal, Ethan's father’s company. Couch had seven passengers in his truck and a blood-alcohol content of 0.24 (three times the legal limit in Texas), along with valium in his system.
You can imagine the outcome of this scenario... the crime spree resulted in the deaths of four pedestrians, and two of Ethan's passengers were severely injured, including Sergio Molina, who suffered brain damage that has left him with blinking as his only form of communication. 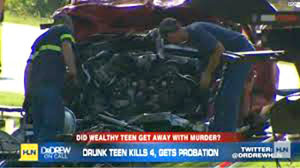 What you cannot imagine is the sentence Ethan received, nor the line of defense that was presented by his counsel.  Juvenile court Judge Jean Boyd sentenced the young man to 10 years probation, despite the fact that Couch has never denied that he was driving drunk that night, nor that he killed those people.  Helped by the defense's argument that Couch grew up in a family that was dysfunctional, in part because of its wealth, Judge Boyd ordered Couch to a long-term, in-patient facility for therapy, rather than sentencing him to incarceration.  It's not that I am surprised that Ethan received therapy instead of jail -- quite the norm in our screwed up justice system -- it's the reasons that he dodged jail time that are so disturbing.
During the court trial, a star witness on Ethan's behalf was G. Dick Miller, a psychologist.  As a defense for Ethan's behavior, Miller diagnosed Couch as suffering from “affluenza”, a psychiatric condition where his parents’ wealth fixed problems in their lives.  Miller explained it this way:  The teen never had to learn to say that he was sorry if he hurt someone. If he hurt someone, his family just sent them money.  He never learned that sometimes you don’t get your way. He had the cars and he had the money. He had freedoms that no young man would be able to handle.  According to Miller, Couch was left to raise himself in a consequence-free environment. Miller advocated for Couch to receive therapy and cease contact with his parents.
But here's the real sickening aspect of this story:  The prosecutors had asked for Couch to receive 20 years in prison.  But when the Judge ordered in-patient therapy, she was of the opinion that programs available in the Texas juvenile justice system might not give Ethan the same level of care that he would receive in the Southern California center that his parents offered to pay for; a facility that costs $450,000/year.
Now, as Raw Story explains it, Ethan Couch will spend no time behind bars for killing four people and paralyzing another, despite admitting guilt, and despite the fact that the diagnosis the defense centered their case around – that of “affluenza” – is not even recognized by the American Psychiatric Association as an actual mental illness! On top of it, it appears that the judge found therapy and probation to be valid because his parents could pay for an expensive center, and that he would not have to rely on the state programs.  In summary, Couch got off because he comes from a wealthy family.
So, exactly how is Ethan Couch learning from his deadly mistake?  Isn't Judge Boyd, in essence, reinforcing the dysfunctional message he has received all of his life .... that his family's money can make any problem go away?  Here is another irony:  Couch and his crime match the majority of offenders in juvenile justice facilities in Texas.  There is nothing different about him, except he is wealthy and white.  The sad truth of this case is that Ethan's wealth has bought his way out of prison, and into a facility that might very well be able to help him.  But what about all the other kids who make similar mistakes, and aren't a member of the wealthy Elite?  Wouldn't society benefit if they could receive the same kind of care? This story is just a microcosm of what awaits our society as our failing economy separates us into the "haves" and the "have nots".

1 Timothy 6:9     "But those who desire to be rich fall into temptation, into a snare, into many senseless and harmful desires that plunge people into ruin and destruction."