The Growing Chasm Between The Classes

In case you need proof that the gap is increasing between society's classes, let me give you a little information.  First, let's take a look at the rich Elite.
USA Today revealed a report on the opulent apartment towers being built in Manhattan.  One such apartment tower under construction, 432 Park Avenue, will have a top floor higher than the Empire State Building's observation deck. Another will have a top floor higher than any in One World Trade Center, which is officially (by virtue of its spire) the nation's tallest building. 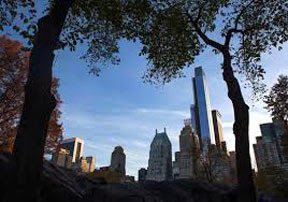 But it's not only the height of these buildings that make them so grandiose; it's their cost.  The 432 Park penthouse has sold for $95 million; two duplex apartments at One57, now nearing completion, also are under contract, each for more than $90 million. Even a studio apartment on a lower floor at 432 Park (designed for staff — a maid or butler) costs $1.59 million.
What is so hard to fathom is that we are a nation that has yet to recover from the 2008 financial crisis.  Those that proclaim that our economy is "recovering" are looked upon with skepticism by just about everybody.  So it should come as no surprise that these towers are occupied by a different clientele: a transnational nouveau riche looking for a second (or third or fourth) home. Having made fortunes in nations less regulated economically and less stable politically than the USA, these buyers want a safe investment as much as, or more than, shelter. And they don't want to pay New York resident income taxes.
Want to get a picture of just who these investors are?   Well, the buyers often hide behind limited liability corporations and confidentiality agreements, but One57 says that more than half of its buyers come from outside the USA, including 15% from China. A Chinese couple recently bought a small, $6.5 million apartment for their daughter to use when she's in college — around 2030.
So while New York City enjoys one of the biggest high rise building booms in its history, more than 51,000 people — 21,000 of them children — spend the night in city homeless shelters.  The contrast is hard to dismiss.
So let's take a closer look at these lower income Americans, and see what the statistics tell us.  According to a report by Reuters, the Census Bureau will tell you that the number of poor people in the United States held steady at nearly 50 million last year; virtually unchanged from a year earlier with the overall poverty rate stuck at 16 percent.  But the data also revealed that without tax credits, Social Security payments and other benefits, it would have been higher for the very poor, the young and the old.
"Millions more people would have been poor in 2012 in the absence of our safety net programs," said public policy and poverty expert Sheldon Danziger, who heads the Russell Sage Foundation social science research center.  There is supplemental data that takes into account benefits that many low-income residents receive, such as food stamps, subsidized school lunches, housing aid and tax credits. It also considers expenses such as taxes, child care and medical costs.
A spokesman for the Center for American Progress stated, "The new supplemental poverty data show an economy that is not working for many people. But it also emphasizes that millions of Americans are being lifted up by effective work and income supports." -- which tells me that it is a false message of economic stability.  When the government can no longer support these programs, millions will fall into a real poverty zone, and the class disparity will grow wider.
Now we come to the economic group that should interest us all the most... the middle class.  I would venture that most of us fall into this group, and we are facing a number of economic challenges. Incomes are stagnant or falling, while the costs of life’s necessities continue to rise, and the risks of falling behind grow.  Once again, you will find government and economic institutions that will paint a rosy picture; saying that the last three decades have seen a steady improvement in both the middle and lower income classes.
In fact, Middle-class incomes have declined over the past decade, and for the past several decades the share of the economic pie that the middle class receives has decreased and fewer people have earned middle-class incomes. Moreover, the costs of middle-class basics have risen, and debt levels have increased.  But I don't need to present any further argument than the five following charts.  They tell the whole picture.

So for all those who tell us that the economy is "thriving", I would like to remind them that the super-rich and the poverty-stricken are not the vital elements of a healthy economy.  It is a strong middle class that drives economic growth, and as this class is driven into extinction by policies that are designed to eliminate it, so will go the future of this country.  It's only a matter of time, at the rate we're going.

Psalm 52:6-7   "The righteous shall see and fear, and shall laugh at him, saying, “See the man who would not make God his refuge, but trusted in the abundance of his riches and sought refuge in his own destruction!"