How can anyone ignore the despicable and utterly hate-filled harangue by a Russian TV star against gay people?  Whether you take a stand on homosexuality based on your faith, a social perspective, or personal experience, everyone should condemn such vile and offensive language and the mindset that provoked them.
How can the world stand by and let such ugly comments as those made by Ivan Okhlobystin go un-denounced?  Personally, his remarks are so offensive to me that I don't even want to repeat them; but unless you know what he said, you will not know how much we all need to take a stand.  I warn you... these words are loathsome.
The Moscow Times reported Ivan as saying, "I’d put them all alive in the oven.  It's a living danger to my children."  He has allegedly come out against what he calls "gay fascism" and feels that gays should be stripped of their right to vote.  “It’s Sodom and Gomorrah, and as a religious person I can’t be indifferent to it, it’s a living threat to my children,” he added.
Now, in case you haven't been focusing on Russia lately, it appears that there is a new totalitarian vein running through the government, and they are appealing to the religious and spiritual yearnings of their citizens.  (In fact, our dear Ivan once served as an Orthodox priest, before removing himself from that position.)  According to a report in The Huffington Post, a “gay propaganda” ban was enacted in Russia in June and essentially bans displays of homosexuality.  It is also “illegal to spread information about non-traditional sexual behaviour” to minors (under 18).  Signed into law by President Vladimir Putin, the legislation gives the Russian government the right to detain gay or “pro-gay” foreigners up to 14 days before facing expulsion from the country.  Furthermore, Russians spreading materials on lesbian, gay, bisexual and transgender rights could be fined.
And, I doubt that anyone missed the thinly disguised reference to the Holocaust in Ivan's little speech.  Lest we forget the historical significance, we need to understand that upon the rise of Adolf Hitler, gay men and, to a lesser extent, lesbians, were two of the numerous groups targeted by the Nazi Party and were ultimately among Holocaust victims. Beginning in 1933, gay organizations were banned, scholarly books about homosexuality, and sexuality in general, were burned, and homosexuals within the Nazi Party itself were murdered. The Gestapo compiled lists of homosexuals, who were compelled to sexually conform to the "German norm." 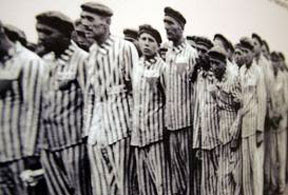 According to Wikipedia, Nazi Germany thought of German gay men as part of the "master race" and sought to force them into sexual and social conformity. Gay men who would not change or feign a change in their sexual orientation were sent to concentration camps under the "Extermination Through Work" campaign.  More than one million gay Germans were targeted, of whom at least 100,000 were arrested and 50,000 were serving prison terms as "convicted homosexuals".  Hundreds of European gay men living under Nazi occupation were castrated under court order.  Lesbians were not widely persecuted under Nazi anti-gay laws, as it was considered easier to persuade or force them to comply with accepted heterosexual behavior. However, they were viewed as a threat to state values.
See the similarity in thoughts and opinions?  Think that the world couldn't see this atrocity repeated?  Whether it is a nationalist frenzy like that advanced by the Nazi's, or a fundamental religious fanaticism, such as Islamic extremism; hatred for specific social groups can be fomented and incited.  As of 2009, there remain nearly 80 countries worldwide where homosexual acts remain illegal (notably throughout the Middle East, Central Asia and in most of Africa, but also in some of the Caribbean and Oceania), including five that carry the death penalty.  When Iranian President Mahmoud Ahmadinejad denies the existence of gays in Iran, there's a reason.
I have made my viewpoint on gay marriage well-known.  But that in no way affects my relationship with my gay friends of both sexes, and this kind of language makes me literally sick.  We are all children of God, and I love them for the people they are.  Their sexuality does not define them, nor does it keep me from honoring and respecting them as a fellow human being.  I cannot cast the first stone, nor does my God ask me to.  I choose to see the person before I see their sexual orientation.  And in the context of this story, one thing stands out ... Evil is evil, no matter who you are.  Lord, help us to overcome hatred.