Overcoming Tremendous Odds: Can We Do It Again?

Today is a very important day in our country's history, but how many will reflect on it; and how many of our younger generation even know about it?  I am talking about the morning of December 26th, 1776. 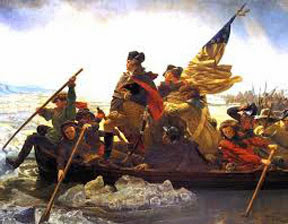 In the Pulitzer Prize-winning novel, Washington, by author Ron Chernow, this epic moment in our nation's story is simply called "The Crossing".  Of course, I am talking about the crossing of the Delaware, a heroic and miraculous venture that played an important part in securing our freedom.  It is a legendary story, and one that, as a child, produced much pride and reverence, and stirred my imagination.  Sadly, I doubt that today's schoolchildren even know of its profound influence on the founding of this nation.  So let's take a moment to give this day its due.
At approximately 8 a.m. on the morning of December 26, 1776, General George Washington's Continental Army reaches the outskirts of Trenton, New Jersey.  According to Chernow's novel, Washington's army was beleaguered; a raggedy band of only a few thousand men.  They had trekked across New Jersey, in the dead of winter; "they had worn out their shoes and crafted makeshift footwear by slaughtering cattle, skinning their hides, and wrapping crude sections around their bare feet."
This ragtag American Army was cold, miserable, hungry and discouraged.  It took them 5 days to cross the Delaware River into Pennsylvania near Trenton.  Imagine the logistics of ferrying horses and heavy artillery across an icy, frozen river!  But it wasn't only planning and coordination that General Washington was contemplating.  He was "concerned with the decay of patriotic support" and the "extreme disarray of American finances."  He faced a total depreciation of the continental currency, and feared that the game was "pretty near up".
Against these incredible odds, Washington banked on his troops personal loyalty to him as he asked them to gamble everything on one final roll of the dice.  Washington and his generals decided to cross the Delaware River on the night of Christmas Day and catch the Hessian mercenaries off guard. It has long been an incorrect legend that the Hessians were able to be defeated because they were sleeping off their drunken Christmas revelry.  In truth, they were on high alert, and likely exhausted from constant drills and patrol duty.  Washington had shrewdly kept them occupied with "irregular raids and small skirmishes".  It is more likely that they were crippled by their low estimation of the American army, and never conceived that the rebels could pull off such a daring plot.
So it was; and Washington watched his troops commence the crossing, their bare feet "tracing bloody streaks in the snow."  Once across, the plan was for them to march another 9 miles to Trenton in the dark and cold and arrive by 5 a.m. on the 26th.
As history tells it, a light rain began to fall at sundown, and Washington crossed the Delaware in advance of his men (the dangerous side of the river in this insane assault).  If news of the raid leaked out, he stood to be captured and killed, and the fate of our nation would have been sealed.  Yet, he remained with his men, and oversaw Marblehead, Massachusetts fisherman John Glover and his "amphibious regiment" ferry 2400 men, skittish horses, and 18 field guns (weighing nearly 400 tons!) across the 800-foot stretch of the Delaware River -- in "a bone-chilling mixture of rain, sleet and wind."
Around 11 p.m., the boats were hit with a terrible northeaster, causing the waters to churn and the men to be bombarded with snow and hail.  This resulted in a frozen river, and the already exhausted troops had to break passage through the solid ice.  Since most of the soldiers could not swim, you can imagine the fear and panic they must have experienced at the thought of capsizing!
But here is where the story takes on a supernatural quality.  The weather elements should have doomed the expedition, and in fact, they caused a serious delay of 3 hours.  So although the army was supposed to be across by midnight, the last man set foot on shore at 3 a.m., and not one soldier was lost in the events of that perilous night.  While the delay was costly in time, the howling weather also muted the sounds of the approaching army, and the blinding conditions hid them from the view of the enemy. 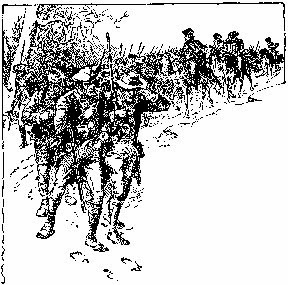 The remaining 9-mile march to Trenton commenced at 4 a.m., with the men marching into a driving gale of sleet, ice and snow.  Washington kept pace with them on horseback and despaired that his army was only half-way to Trenton when the daylight broke at 6 a.m.  He decided to keep to his original plan, and divide his army into columns, attacking Trenton from both the high and low roads.
Imagine his distress when informed that the weather conditions had rendered his men's weapons useless.  "Tell [General Sullivan] to use the bayonet," Washington said.  "He then galloped along the lines trying to speed the march's tempo in the brightening morning light.  Press on, he urged the men.  Press on, boys!"
As the bone-tired American troops emerged from the woods near Trenton at 8:00, their Commander-in-Chief rode at the head of the middle of three columns.  His men rallied at his side and by sheer determination caused such "hurry, fright and confusion of the enemy... [not] unlike that which will be when the last trump shall sound", reported General Henry Knox.
Author Ron Chernow sums up this historic day in a concise and factual statement ... "The American triumph was accomplished in less than an hour."  It has further been written by early 20th century historian George Trevelyan, "It may be doubted whether so small a number of men ever employed so short a space of time with greater and more lasting effects upon the history of the world."  To that point, the toll on the Hessians was great:  22 killed, 84 wounded and nearly 900 captured.  There were only 2 American deaths attributed to combat, and possibly 4 or 5 due to exposure to the cold.  But the impact went far beyond numbers of casualties.
This victory at Trenton gave General Washington a much-needed boost in confidence and gave our cause legitimacy.  The events that happened 237 years ago this morning should be taught to every schoolchild.  And they should give every American the courage to soldier through whatever adversities we may face in the coming months and years.  Then as now, Washington's crossing and the Battle of Trenton were emblematic of the American Patriots' surprising ability to overcome the tremendous odds they faced in challenging the wealthy and powerful British empire.
I ask you, do we face any less of a formidable enemy?  Let us adopt Washington's wisdom, his courage, his resilience and his determination.  Abigail Adams proclaimed what she thought was his best trait ... "Affliction is the good man's shining time."  Let it be ours, as well.

Isaiah 40:29-31     "He gives power to the faint, and to him who has no might he increases strength. Even youths shall faint and be weary, and young men shall fall exhausted; but they who wait for the Lord shall renew their strength; they shall mount up with wings like eagles; they shall run and not be weary; they shall walk and not faint."