Our Veterans Have Sacrificed Enough

I was deeply troubled when I heard that the new Budget Bill brokered by Representatives Paul Ryan and Patty Murray delivers another blow to our wounded veterans.  On Wednesday, the Senate voted 64-36 to pass this controversial budget deal.  The bill would cut retirement benefits for military retirees by $6 billion over 10 years.  As if that is not unforgivable enough, a sentence reading “This would not affect servicemembers who retired because of disability or injury” has been removed from a summary now posted on the House Budget Committee website.
I find it absolutely unconscionable that, first of all, our military veterans would be asked to sacrifice their retirement pensions after all they've sacrificed for this country.  Secondly, it is indefensible that Congress would not exempt those who have been disabled or wounded during their service.
The Washington Free Beacon reports that the Ryan-Murray deal affects Chapter 71, Section 1401 of the United States Code, which deals with the pay of military retirees.  As the code is currently written, servicemembers can be eligible for early Chapter 61 retirement if it is determined that, due to a physical disability, that individual is no longer able to perform the duties of their office, grade, or rank. The individual must hold a disability rating of 30 percent or more according to Department of Defense standards, and the disability must be the proximate result of performing their duties during a time of war or national emergency. 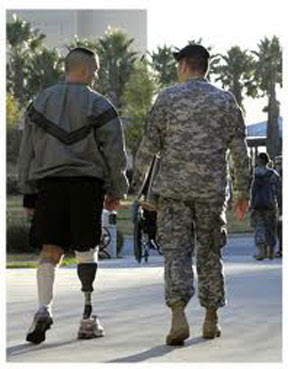 A summary of the original budget agreement, obtained by the Free Beacon, explicitly stated that disabled veterans would be exempt.  However, Section 403 of the budget agreement amends section 1401a(b) of Title 10, U.S. Code, adding adjustments equal to inflation minus 1 percent, thereby lowering the Cost of Living Allowance (COLA) of disabled retirees.  The Free Beacon goes on to report that wounded servicemembers are entitled to Veterans Administration Disability Benefits, which remain unchanged by the budget deal. However, the change to Chapter 61 retirement could account for about 55 percent of a wounded service member’s disability pay, according to a Senate aide.  For example, a 28-year-old staff sergeant (an E-5 rank) who is forced to retire after 10 years would see approximately $50,000 in lost compensation over the next 40 years.
And you want to know how Representative Ryan justifies the changes?  He says they are appropriate because servicemen and women who retire in their 40s after serving for two decades are still young enough to maintain a job.  But that doesn't address the wounded veteran who may not be able to obtain further employment.
But there's another unethical element to this whole affair.  This bill would cut the benefits of military retirees, while not imposing equal cuts to federal civilian workers.  As Senator Jeff Sessions stated, “It is unthinkable that this provision would be included in a deal that spares current civilian workers from the same treatment.”  This is just an example of the Military-Industrial complex at its worst!  Those who have sacrificed the most will be the ones who pay the most to allow for increased government spending.  And this amendment to the bill did not have to be!
Senator Sessions proposed an amendment that would eliminate an estimated $4.2 billion in annual spending by reining in an IRS credit that illegal immigrants have claimed.  In essence, Sessions’ office claimed that a vote to block his amendment was a vote to "cut military pensions instead of cutting welfare for illegal immigrants."
To summarize this whole mess, Will Allison, spokesman for the House Budget Committee, made this statement:  "The COLA provision does not include additional exemptions [for wounded or disabled  veterans], but to clarify: The Bipartisan Budget Act does not affect any benefits provided to veterans in compensation for disabilities suffered as a result of their service.  There are no changes made to disability-compensation benefits and no changes that would impact their VA-provided medical care.”
"The federal government has no greater obligation than to keep the American people safe,” Allison told the Free Beacon. “And it must take care of the men and women in uniform who put their lives on the line. To meet our obligations to our service men and women, we must make sure their long-term benefits are on a sound, financial footing."  All their benefits, except for retirement, of course.
Disabled retirees, who were previously thought to be exempt from the changes to military retiree pay, could now lose up to $124,000 over a 20-year period.  Does that sound like the government is meeting their obligations?  Shame on Congress!

Romans 12:10   "Love one another with brotherly affection. Outdo one another in showing honor."