Free Speech vs Profits ... Which One Will Win?

I thought I would wait a few days before jumping into the fray over Duck Dynasty's patriarch, but it's hard to ignore the firestorm Phil Robertson's comments have created.  I have a feeling that no matter what I say, I'm not gonna win.  If I say Phil Robertson's remarks were scripturally correct, and I stand behind his right to express his religious beliefs, then I will be labeled a hater by the LGBT defenders.  And if I say, the way he chose to express his personal opinion was ... well, a little crude ... then I might be accused by my Christian brethren for not taking a strong enough stand against biblical sin. Either way, we as a society, do not win. 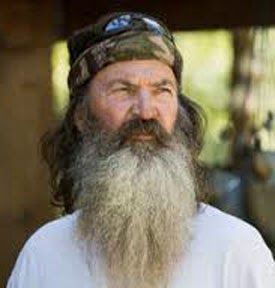 Because, you see, I think this whole brouhaha is about much more than a Cajun redneck's diatribe about homosexuality.  What Phil was really saying --- and what A&E can't stand --- is that sin is becoming acceptable in America, and that the country needs to turn back to its Christian values.  So the first thing I see is the power of the media to try and control the culture.
It has been oft reported that A&E is none too happy about what they call "proselytizing" by the Robertson family.  They would rather not show the Robertson family around the dinner table, praying to Jesus, at the end of each episode.  But Papa Phil stuck to his guns and threatened to pull the plug on the highest rated cable TV show in history, unless they could glorify their God.  Success does have its privileges.
So I can imagine that A&E Executives have been salivating over the right opportunity to sever the stranglehold that this provincial Christian family has had over the millions of Americans that tune into their staged "reality" show.  And Phil, in all his brutal honesty, served it up on a silver platter.
Now, you might think, why in the world would Phil Robertson ever subject himself to an interview in a publication like GQ?  After all, they don't exactly have a lot in common, and don't you think they probably "baited" him?  I mean, he's not exactly reticent about expressing his opinion.
I have heard Mr. Robertson speak in person, and he is passionate about sharing the Gospel at every turn and opportunity he receives.  To say the least, he is bold and unafraid.  And why shouldn't he be?  If, like Phil, you know that you are a citizen of God's kingdom, and this world is transitory, then where should your loyalty lie?  Other celebrities certainly use their platforms to promote their ideologies and agendas.  But somehow, if you are a Christian and your faith is your foundation, then anyone you offend or anyone who disagrees with you can claim you have discriminated against them.
Which brings up another question I have.  Of late, Miley Cyrus and Bill Maher have managed to consistently offend me with their actions and their words.  But does the Media take into account the opinions of Christians or Conservatives when it comes to censoring their visibility on TV?  No!  And I would never suggest that they be denied the right to earn a living because I disagreed with them.  And what makes the Elite think they can speak for all of America in deciding what is offensive and what is not?  I think it is obvious that they kowtow to the Hollywood Left and its politically correct mindset.  In fact, there is one report on the internet that says Phil's suspension was announced after a late-night call from GLAAD, the media monitoring organization which promotes the image of LGBT people in the media.  Can you say "pressure to punish"?  (By the way, I would say by the amount of gay characters on TV these days, they must be a pretty powerful lobby).
I also find it interesting that a spokesman for GLAAD, the newspaper Variety, and the Huffington Post, among many others, chose to label Robertson's remarks as "anti-gay", while failing to disclose other parts of his interview in which he states, “We never, ever judge someone on who’s going to heaven, hell. That’s the Almighty’s job.  We just love ‘em, give ‘em the good news about Jesus – whether they’re homosexuals, drunks, terrorists. We let God sort ‘em out later.”  Once again, I'm left to ponder why the Left cannot understand that one's religious stance on a particular sin can be separated from how we Christian's treat our fellow man.
So now let's talk about free speech.  Do we have a First Amendment that guarantees free speech for everyone, or not?  And why is it OK to speak all the hateful and vile comments coming from the gay community, but not acceptable for Phil to state what his religion tells him?  Why is the first response always to attack?  And why is one automatically labeled a bigot if you have a different opinion?
It seems to me, that this is a perfect opportunity to engage each other in meaningful discussion.  Rather than silence and suspend Phil Robertson, A&E could encourage open communication between differing groups and accomplish true understanding and tolerance --- by both sides.  Instead they have stirred up a hornet's nest; as of this writing, over 1.2 million people have taken to a Facebook page to support Phil Robertson.  (Don't you find it ironic that it took a couple of months to get a little over 100,000 people to sign up for Obamacare, but in less than 24 hours this site was overwhelmed with those anxious to sign up to endorse Phil's comments?)
Conservative Christians are tired of being misrepresented and dictated to by entertainment corporations who greedily accept our hard-earned dollars, while disrespecting our faith and shoving their agendas down our throat.  We are fed up with being marginalized, and that's why Phil Robertson, even with his less-than-genteel speech, is being hailed a hero for standing up to the forces that would silence us.  I sense that A&E's decision is going to affect their wallet, and I have a feeling the Elite just might regret their knee-jerk punishment of the Duck Commander.

2 Timothy 4:1-2    "I charge you in the presence of God and of Christ Jesus, who is to judge the living and the dead, and by his appearing and his kingdom: preach the word; be ready in season and out of season; reprove, rebuke, and exhort, with complete patience and teaching."