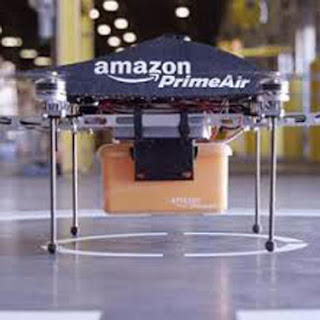 By now you've probably heard all the buzz over Amazon CEO Jeff Bezos's appearance on 60 Minutes.  Apparently the Research & Development Labs over at Amazon have been working overtime to come up with the latest techno device to impress their customers.  It's called Amazon Prime Air and could make delivery time of Amazon products as low as 30 minutes.  You read that correctly ... 30 minutes!
Before you get all excited about signing up for this "autonomous vehicle delivery system", there are still a couple of issues that need to be resolved.  At the low end of consideration is the fact that packages over 5 pounds won't be feasible.  But since a reported 86% of Amazon's business falls within that parameter, there's no real need for concern.  But there's still the tiny problem with the FAA -- they haven't approved domestic drone flights yet.
True, there is a mandate for them to come up with a plan to integrate drones into domestic airspace, but with that directive comes the responsibility to safeguard privacy, civil liberties and security.  Quite an important set of imperatives, wouldn't you say?  And from everything I've read, they are nowhere near guaranteeing any of these crucial measures.  It seems to me that the Federal Government, with their combined love of regulations and surveillance, could easily overstep their bounds and infringe even more upon our right to privacy.
Then, of course, there is the matter of security.  How much do you trust the FAA to oversee security on a drone that lands at your doorstep?  How will they guarantee that these unmanned aerial transport systems won't be skyjacked and deliver a little more bang for your buck, so to speak?
Of course, Amazon isn't selling any of those concerns.  They are touting the convenience and the immediacy of delivery.  In fact, they are so proud of their invention, proclaiming "One day, Prime Air vehicles will be as normal as seeing mail trucks on the road today."  But as I perused the comments section after one particular article on Tech Crunch, I realized that the techies had considered things that my pre-computer brain had not pondered.
What if you live in a neighborhood or rural area with lots of trees?  What is to keep your package (or the drone, for that matter) from being stolen?  (I can think of lots of reasons that drones might become a hot black market item -- none of them are good).  What if you live in an apartment or condo?  Where does the drone drop the package?  Does this lead to an inevitable layoff of even more workers from the already fragile US economy?  Then of course, there are the inevitable law suits that come from property damage, injuries due to malfunctioning drones, etc., etc.
So, while I find all the titillation and excitement behind Bezos's announcement to be amusing, I want to go on record that I am not interested in living out any episode from the old Jetson's TV show.  My Roomba vacuum is as close as I want to get to Jane Jetson's maid, Rosie.  I'd rather see the smiling face of Eli, my UPS driver, than hear the whirring arrival of a drone at my doorstep.  Just my opinion!