They say that the American public's memory is short-lived; if you've disgraced yourself, just disappear into the shadows for a little while and you can re-emerge with no one the wiser.  Such is the case with the Service Employees International Union ... remember them?  Yes, SEIU is back!
If you will recall, this labor organization was involved in some pretty shady electioneering efforts during the last presidential campaign.  Furthermore, LaborPains.org reports illegally funneled money from various Locals into the campaign coffers of union-friendly candidates; along with questionable cash withdrawals from bank accounts, lack of documentation for outrageous travel expenses, and lucrative vacation buyouts that were not authorized by union boards.
So I guess I shouldn't be surprised to see that they are back at it; stirring up trouble and creating havoc among the labor force.  This time they are backing a one-day strike by fast-food employees, who are demanding a $15-an-hour wage.  Union organizers have planned strikes in over 100 cities, including Charleston, South Carolina; Providence, Rhode Island; and Pittsburgh, Pennsylvania.  SEIU is also demanding that restaurants allow workers to unionize without the threat of retaliation. 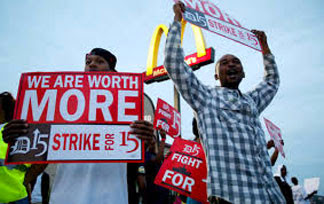 Here's the thing .... I am all for a worker getting paid a fair wage for what his work is worth.  Currently, the federal minimum wage is $7.25.  Have these workers given serious thought to the burden that doubling their wage will cause on the fast food industry, and what some of the likely results would be, should that wage be met?  If all fast food workers were paid $15 an hour, can you see that the cost of a meal would necessarily have to rise?  And remember, profit is the name of the game, so it makes sense that fast food restaurants would either consider turning to automation for some of their positions; or be forced to lay off workers, causing fewer employees to carry more of the load.  Kind of defeats the purpose, doesn't it?  Add to this, the fact that Fast Food Industry officials say that only a small percentage of fast-food jobs pay the minimum wage, and that those are largely entry-level jobs for workers under 25.  In other words, you may start out at the bottom, but you can climb the ladder in both pay and positions, just as in other industries.
I personally know of several young people who started out at the entry level in well-known fast food chains, and through steady and reliable work, it didn't take them long to reach management level which came with a good salary and benefits package.  I guess it's all about your perspective ....
To give a voice to the backers of this movement, they say that studies show that the average age of fast-food workers is 29 and that more than one-fourth are parents raising children.  Take the story of Simon Rojas, who earns $8.07 an hour working at a McDonald’s in South Central Los Angeles, and who said he would join the one-day strike.
“It’s very difficult to live off $8.07 an hour,” said Mr. Rojas, 23, noting that he is often assigned just 20 or 25 hours of work a week. “I have to live with my parents. I would like to be able to afford a car and an apartment.”  Mr. Rojas said he had studied for a pharmacy technician’s certificate, but he had been unable to save the $100 needed to apply for a license.
Now, I don't mean to unfairly question Simon's work ethic; there is likely more to his situation than presented here, but I have a couple of questions.  First of all, at $8.07/hr, it would take less than 12.5 hours to earn that $100.  OK, let's take into account the taxes that would be deducted from his paycheck.... it would still take less than one 20-week paycheck to get the money he needed for that pharmacy tech's license.  He's living at home, with no car expenses... maybe it's me, but that doesn't seem insurmountable.
Secondly, if Simon is only receiving 20-25 hours a week, what's stopping him from getting a second job?  Doesn't it seem logical that another 20-hour week job would greatly increase his income?  I realize that he won't be buying a fancy car, or renting a penthouse on that salary in the near future, but by taking advantage of living with his parents, his options are actually quite good for taking night classes or going to a technical trade school, which would give him a bright future.
How many of these fast food workers have set their eyes on a goal beyond working in the fast food industry?  Do they see it as a stepping stone, or do they just want to be paid more to stay at this level?  I am not putting down fast food workers... their job is not easy and it's long hours on your feet.  But I recently met an 18-year-old who was working the cash register at a local Burger King who offered the best customer service I'd seen in a long while.... smile, upbeat attitude, courteous and excellent service.  When I commented on his demeanor, he said, "Yes, ma'am, I plan on being a manager at this location in the next 18 months," and he quoted me a rather generous 5-figure salary that would accompany that position.  He then proudly announced that he would soon thereafter buy his first franchise of several he planned on owning.  I had no doubt that he would reach his lofty goal.  Furthermore, that's the spirit that no union can force at the bargaining table!

Proverbs 16:3    "Commit your work to the Lord, and your plans will be established."