Can Iran Be Trusted?

It's always enlightening to compare news accounts from the foreign press with our increasingly partisan and politically correct mainstream media.  That's why I found this report from Ynetnews, an Israeli online news source to be of particular interest.
According to this website, The Financial Times of London interviewed Iranian President Rouhani in regards to the recent nuclear "deal" between the United States and Iran.  The article quoted Rohani as clarifying that his country has no intention of disarming its nuclear facilities.  Does this really surprise anyone?  “One hundred percent (no),” he said when asked whether he would concede to the demands of Israel and US hawks. The Iranian president stressed throughout the entire interview that Iran maintains the right to enrich uranium for peaceful purposes.  (Of course, we are to ignore Iran's incessant ravings of wiping Israel off the face of the map ... not a particularly peaceful statement, by my calculations). 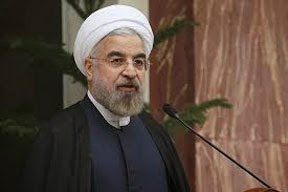 If you believe President Rohani, it's all about re-establishing trust with the U.S.  “Iran-US problems are very complicated and cannot be resolved over a short period of time. Despite the complications, there has been an opening over the past 100 days, which can widen later,” he said.  (What was left unspoken is the fact that they will continue with their nuclear program during this "test period" of trust).
I found one statement to be especially amusing --- The Iranian president referred to a phone conversation he held with his US counterpart President Barack Obama and said: "I found him someone with very polite and smart language."  Watch out, Rohani, you'd be accused of being racist in the U.S.!
But here's the meat of Ynetnews's report and The Financial Times article -- a more candid appraisal of the agreement between Iran and America, if you will: "The concessions made to Iran will have to be balanced by a major rollback of Iran’s nuclear infrastructure – with no automatic expiration date." The paper further notes a contradiction in US Secretary of State John Kerry's remarks, who said that Iran’s assertion of a "right to enrich” uranium would not be recognized in an interim deal, while the text says the “comprehensive solution” will “involve a mutually defined enrichment program with mutually agreed parameters.”  So who do you think is telling the truth?
But let's read on ... "In other words," the article reads, "the United States and its partners have already agreed that Iranian enrichment activity will continue indefinitely. In contrast, a long-standing US demand that an underground enrichment facility be closed is not mentioned."
The Financial Times of London further criticizes the presentation of the agreement, by which a final accord will be completed within six months. The interim deal reads that after six months talks may continue when "the parties aim to conclude negotiating and commence implementing (in) no more than one year."  Which backs up my original assessment, that this just gives Iran a "no hassle" six-month-free period to continue its enrichment, with no one looking over their shoulder.
I don't think any of us are really surprised at these revelations, are we?  It's really just a sad commentary on the trustworthiness of our Media and our Politicians; that we have to go to an Israeli website that is reporting on a British newspaper article to get a balanced assessment on important negotiations that affect our national security.  It's a sad (and dangerous) state of affairs, indeed!

Psalm 24:3-4    "Who shall ascend the hill of the Lord? And who shall stand in his holy place? He who has clean hands and a pure heart, who does not lift up his soul to what is false and does not swear deceitfully."
Posted by Pam Kohler at 7:00 AM