When We Lost Our Innocence 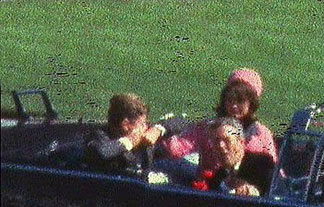 Fifty years ago today is burned within my memory.  I was sitting in an elementary school class, when the Principal entered the classroom and strode over to whisper in our teacher's ear.  I will never forget her gasp and her choked voice as she announced that President Kennedy had been shot.  Being too young to really understand the gravity of that statement, and being disconcerted by the tears rolling down the teacher's face, we kids didn't really know what to do.  We reacted in a variety of ways; some laughed, some sat in stunned silence, and some softly cried in response to the teacher's own weeping.
But that day forever left a mark on my life and remains the most defining event of my lifetime.  For, somehow, even as a child, I knew that there was more to the story.  I could sense that there were elements of this historical event that pointed to something sinister and disquieting.  And then as I grew older, and my early teen years were interspersed with the assassinations of Dr. Martin Luther King, Jr., and then Robert Kennedy, I began to be fully aware that I didn't live in a spotless, untainted society.... that those in leadership positions were far from the knights in shining armor who selflessly served the masses.
It was as if that tragic event on November 22, 1963 in Dallas stripped away the fantasy and revealed the dark underbelly of power and politics.  I've told you that I came from a vanilla Midwest town to attend college in Texas, and it didn't take long for the rumors of scandal that had always surrounded LBJ to begin surfacing after his death in 1973.  And enough years have passed since those historic times, that any attempt to whitewash his legacy has eroded.  In fact, if recent biographies on him are to be believed, "scoundrel" doesn't even come close to describing the depths he would go in order to protect his power and authority.  That coupled with the growing efforts to disprove the Warren Commission's findings on Kennedy's assassination, are enough to give one serious pause.  Will we ever know the truth about what led the nation to that tragic day?  And based on all the succeeding events in our history ... the murders, the misconduct, the conspiracies ... are you still capable of believing that Lee Harvey Oswald acted alone; or that he was even the gunman?  (For a very interesting look at his supposed involvement, read a book titled Dr. Mary's Monkey, by Edward T. Haslam.  It is a seemingly preposterous theory about how the unsolved murder of Dr. Mary Sherman, a secret laboratory in New Orleans, and cancer-causing monkey viruses are linked to Lee Harvey Oswald, assassination and emerging global epidemics.  Preposterous --- until the author connects the dots, and by following a trail of police records, FBI files, cancer statistics, and medical journals, he presents compelling evidence of a web of medical secret-keeping that began with the handling of evidence in the JFK assassination.) 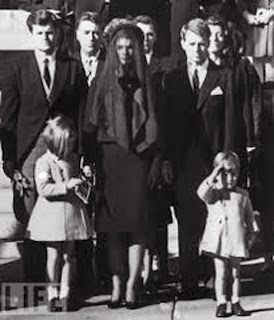 Yes, that dark day in Dallas forever changed this country and seems to have opened a portal of lies, deceit and murder that swirls to this day around the seats of power in our government.  The genie is out of the bottle and we can't stuff him back in.  I'm not naive enough to suppose that the days of JFK's Camelot really existed; his own immorality, and that of his father and brother are well known.  But, at least to me, it seems that there was still a small degree of respect for this nation and the office of the Presidency.  At least, my generation remembers the admiration and the honor that were associated with the role of President.
Subsequent generations have seen the office sullied by illegal surveillance, affairs with interns and bowing in deference to foreign kings.  And those are just the things that we've uncovered!  So, as I reflect back upon the terrible event that occurred 50 years ago today, I grieve the losses --- the loss of a dynamic leader, the loss of my idealism, and the loss of honor in this nation.  After all, isn't that the real message of that day; that we lost our essential character of being the country who stood for what was right and moral?
So while the flame of John F. Kennedy's life was snuffed out, I still hang on to that child I was 50 years ago.  My idealism has certainly suffered through the years, but it is not extinguished.  I can still hear President Kennedy's famous words echoing in my head ... Ask not what your country can do for you; ask what you can do for your country.
But perhaps on this anniversary of his death, we should revisit this inaugural address and contemplate other lesser know phrases from his speech ... [that] the same revolutionary beliefs for which our forebears fought are still at issue around the globe—the belief that the rights of man come not from the generosity of the state, but from the hand of God.
I would like to think that we can still fulfill his hopes and dreams to continue our proud heritage.  And let us embrace these last words of his Presidential address:  Let every nation know, whether it wishes us well or ill, that we shall pay any price, bear any burden, meet any hardship, support any friend, oppose any foe, in order to assure the survival and the success of liberty.

Email ThisBlogThis!Share to TwitterShare to FacebookShare to Pinterest
Labels: History, Liberty and Freedom