Once Again, God Is Disrespected

Twice within this last week, the intentional removal of oaths to God were permitted (and approved) by those who should be ashamed.  First, it was the Air Force Academy, who once again attempted to remove "So help me, God" as part of the Academy's protocol. 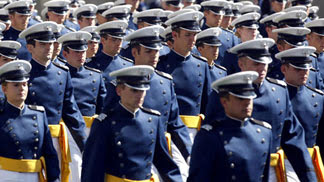 Last month, they were embroiled in a controversy involving “so help me God” after they decided to make it an optional part of the Honor Oath. The revision was made following a complaint from the Military Religious Freedom Foundation (MRFF).  What I find particularly puzzling about this situation is that only 68 minutes after MRFF President Mikey Weinstein had filed a complaint regarding the Honor Oath and a poster that appeared at the Academy with the "offensive" words, Academy Superintendent Lt. General Michelle Johnson ordered the art work removed.  Don't you think that the opposition to a poster bearing the Honor Oath (which was adopted in 1984 by cadets and represents the minimum standard of ethical conduct that cadets expect of themselves and their fellow cadets) should carry more weight and take considerably longer than an hour to abolish?
This Honor Oath is really very simple:  We will not lie, steal or cheat, nor tolerate among us anyone who does.  Furthermore, I resolve to do my duty and to live honorably, so help me God.  I mean, really ....  who would deny someone seeking the help of God, should they so desire?  Why couldn't Mr. Weinstein and the MRFF just request that any cadet who feels they can go it alone, be allowed to omit the words while taking the Oath?  Why deny those who put their faith in the Almighty from the confidence these words instill?
But the removal of "so help me, God" from the poster and the Honor Oath weren't enough, it seems.    It has now come to light that the Contrails Cadet Handbook excludes the phrase in the Cadet’s Oath of allegiance, the Oath of Office for Officers and the Oath of Enlistment.
Fortunately, after being contacted by concerned parents of cadets, Representative Jim Bridenstein (R-Okla.) and 28 other lawmakers stepped in with cooler heads.   These astute members of Congress sent a letter to Academy Supt. Lt. Gen. Michelle Johnson demanding that she explain why the phrase was removed.  “The First Amendment to the United States Constitution prohibits the establishment of religion’; however, the inclusion of the phrase ‘so help me God’ in an oath of service does not rise to this level.”  In the letter to the Academy, Bridenstein went on to say, “editing the oath for all Academy students is extreme and unnecessary, and does a disservice to the countless individuals who wish to include the phrase as a solemn reminder that they are pledging their fidelity to God and country.”
Of course, the Academy's public relations office says the removal of the phrase from the three Oaths was a simple mistake; "an editorial oversight".  Yeah, right.  Someone gave the order!  Let's hope that this Congressional contingent pursues this matter and roots out the anti-faith forces within this fine military institution. 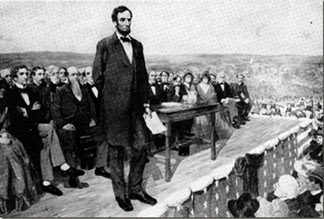 Yet, what can you expect when their Commander-in-Chief omits an “under God” reference, in a film commemorating the 150th anniversary of Abraham Lincoln’s Gettysburg Address.  In his defense, the White House said the president read the first draft of the historic Civil War speech,  known as the Nicolay version, which does not include the under God reference, as requested by film-maker Ken Burns -- a statement confirmed by a Burns producer.  And I will grant that there are five versions of the speech written in Lincoln's handwriting --- three with "under God", and two, without.
But as the first black President, who calls himself a Christian, wouldn't you think you would give a nod to your God for the great honor bestowed upon you?  Or at least go with the majority of speeches, which included the "under God" phrase?  I, for one, agree with Representative Jim Fleming of Washington, who along with others said, "Whether you learned the Gettysburg Address in school or saw it recited in a movie or a documentary, you heard these words: 'that we here highly resolve that these dead shall not have died in vain; that this nation, under God, shall have a new birth of freedom."'
For the record, Historians are divided on whether Lincoln included the words "under God" in his spoken address, since there was no audio recording at the time. Some witnesses and reports include a reference to God at the end of the address, and others do not.  But President Lincoln obviously subscribed to the notion that this nation could be rejuvenated in a new sense of freedom, with the help of God, or this phrase would not have existed in ANY of the versions.  But the fact that it was deliberately ignored, should tell us a lot, should it not?
Which makes me wonder how much the President believes in the final words of that paragraph ....  that the nation, under God, shall have a new birth of freedom, and that government of the people, by the people, for the people, shall not perish from the earth."  It is quite clear to me that the latter will not stand without the protection of the former.  I presume that this is something that President Lincoln understood all too well.  Let's pray that a "government of the people, etc." does not disappear from this current President's ideology as easily as he discarded God.

Psalm 35:27   “Let them shout for joy and be glad, Who favor my righteous cause; And let them say continually, “Let the LORD be magnified, Who has pleasure in the prosperity of His servant.”