The Winner Takes All

You know, I've heard a popular talk radio host telling his audience that when the enemies of America fear they are losing their attempt to change us from the inside out, that they will ratchet up their oppression and begin throwing everything they've got at us and the Constitution.  He is encouraging all of us not to give up ... we're on the verge of winning!
I agree that the latest debacles do nothing to endear the masses to the Progressives (whether they be Left or Right).  The failure of Obamacare, the embarassment of the government shutdown, the continual lies on everything from Benghazi to the NSA, and the arrogance of elite politicians who disdainfully declare that "they don't work for us" --- all these things point to incompetent and amateur governing of the nation. 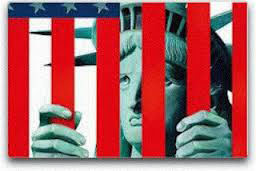 And, yes, I sense a groundswell of everyday citizens -- from retirees to college students to veterans -- who realize what is at stake and are willing to stand to save the country.  But I also comprehend that those who hate this country know that they are the closest they've ever been to transforming us into a totalitarian state; one that strips us of our individual rights and freedoms and establishes a system of government that is centralized and dictatorial and requires complete subservience to the State.  Call it what you will .... Communist, Socialist, Fascist .... it doesn't matter.  Because fundamentally, it is Un-American!
I will agree that the enemy within did not count on so many of our citizens becoming educated and active in defending our freedoms.  True, we fell asleep on the job.  Our inherent tolerance opened the door to a flood of ideologies that oppose our unique spirit of acceptance, and now dare to call us bigoted, small-minded and discriminatory.  But while we may have become lazy in protecting our freedoms, we are uniting in a common cause of restoring them.  The enemy from within is discovering that we are not all as docile and submissive as they thought.  And now they are like the bully in the schoolyard:  they've suffered a black eye or two, and gotten punched in the nose; the wimpy kid is fighting back, so they've got one last shot to maintain their power over us.  It's clear we won't surrender our freedoms willingly, and their back is against the wall.  Who will blink first?
But it's not only the domestic enemies we must worry about; it's the foreign ones, as well.  Like sharks, they smell blood, and sense the weakness of our infrastructure.  They're circling us, waiting for that moment we sink below the surface and are easy prey.
I confess, there are days that I feel we won't surmount these opponents to our Liberty.  I ask myself, "Isn't this what we deserve?"  We have squandered our hard-earned prosperity and are sinking (both individually and nationally) in a sea of debt.  We have suffered a stain upon our character and no longer resemble a God-fearing nation who embraces exceptionalism, innovation and competition.
But then I remember where and who we came from.  We are the sons and daughters, and grandchildren, and great-grandchildren of men and women who have suffered intolerable times of difficulty: holocausts, famines, genocide, pandemics, religious and ethnic persecution, slavery.  They overcame those tragedies and troubles because of the hope that America offered.  For whatever reason, this land was a gift from God to mankind (whether you believe in Him or not).  It was founded as the best hope of mankind to live free; a land where a man could reach his full potential.  Each time we stumbled and threatened to snuff out that hope, we rallied and fought off our destruction -- through the struggles from our inception to establish a republic state in which supreme power is held by the people and their elected representatives; through a bloody and costly Civil War to eradicate the evil system of slavery.  We have been victorious in two wars that engulfed the world and overcome economic disasters.  We don't give up.
We've made our mistakes, and we're not perfect.  But we've always been a beacon of hope to the rest of the world.  In America, you can become the best that you are.  Now, that hope is under a very real threat.  To be honest, I'm not sure we can overcome all of our enemies this time.  We are not only fighting against powerful ideologies and men, but the dark, spiritual powers behind them.
I may hesitate in declaring a sure victory, but I am not without hope.  I know that spiritual warfare is waging all around us, and I know that the righteous of this nation are worth fighting for.  I also know that the American spirit will never give up.  And I know in the end, God's will; His perfect and good will, must win.  I humbly submit to that outcome.

Proverbs 3:5-6    "Trust in the Lord with all your heart, and do not lean on your own understanding. In all your ways acknowledge Him, and He will make straight your paths."
Posted by Pam Kohler at 7:00 AM