A frightening article on The End of the American Dream website detailed perhaps the worst part of the Obamacare debacle:  the tremendous doctor shortage that we will soon be facing.  According to the article, right now, the U.S. has close to a million doctors, and about half of them are over the age of 50. To put this all into perspective, most Americans don’t realize that we already have a shortage of doctors in this country; close to 20,000 nationwide.
But remember that with half of the doc population over 50, many if not most of them will be retiring soon; and with the ACA disaster, you can likely count on sooner than later.  So, it is now being projected that we will need an additional 52,000 primary care physicians by the year 2025.  And that figure only denotes primary care physicians!  Overall, the American Association of Medical Colleges has projected that we will experience a shortage of more than 150,000 doctors over the next 15 years. 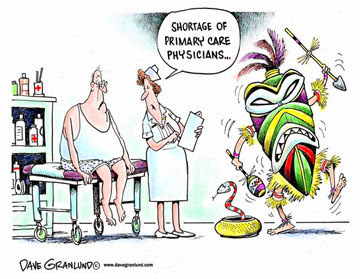 And if you think that the ACA isn't a huge factor, just consider this fact:  a Physicians Foundation biennial survey of 13,000 doctors found that 60 percent would choose to retire today if they could. This is up from 45 percent when the survey was done in 2008, two years before the law was enacted.
But besides the issue of retiring doctors, what if current doctors just decided not to accept Obamacare patients?  What if your current policy is canceled because it doesn't meet the minimum standards as set forth in the law, and you are forced onto one of these policies (that's if you can even afford them!)?  A poll conducted by the New York State Medical Society finds that 44 percent of MDs said they are not participating in the nation’s new health-care plan.  Another 33 percent say they’re still not sure whether to become ObamaCare providers.  Only 23 percent of the 409 physicians queried said they’re taking patients who signed up through health exchanges.  So even you somehow miraculously obtain a new government health care policy, there is no guarantee that you will find a doctor to accept it!
We have to face it, folks!  As the article points out, we are entering a time when the U.S. medical industry is experiencing a massive transition.  Gone are the days of the friendly family doctor that would care for you and your children from the cradle to the grave.  Those old school physicians are slowly but surely leaving the profession.  And the relationship between doctor and patient has been savaged by the federal government, state governments, health insurance companies, pharmaceutical companies, and health administrators.  It just ain't what it used to be!
So what is the solution?  How will we overcome the doctor shortage?  Well, I can tell you that higher premiums from those who are producers will not adequately cover those who are the takers.  Average citizens will be unable to afford health insurance and will just stop going to the doctor.  I guess fewer patients = less need for more doctors, right?  At least that's how the government probably solves this mathematical equation.  Living to a ripe, old age suddenly doesn't seem so attractive anymore.

Jeremiah 8:22     "Is there no balm in Gilead? Is there no physician there? Why then has the health of the daughter of my people not been restored?"