It's rare that you see such incorruptible faith in one so young, but a high schooler in Kentucky knows what she believes and why.  Whitley County High cross country runner Codie Thacker voluntarily forfeited her spot in a regional championship race after her coach drew bib number 666 for the runner.
Most kids would have laughed it off, or put personal achievement above the implication of this numerical sequence.  Not Codie.  To her, running with the number 666 on her chest would have signified a serious violation to her faith.  "I didn't want to risk my relationship with God and try to take that number," Thacker said. "I told them to mark out my name because it makes me sick just thinking that my name is associated with that number." 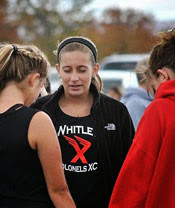 I'm sure I don't need to educate any reader of this blog about the message that particular number sends.  It is Biblical, and it signifies the name of "the Beast", or the Anti-Christ.  There is so much speculation regarding the possible "numerical codes" that will reveal who this person will be.  But suffice it to say, that to Codie, being associated with that number, in any way, is an insult to her God and to her faith.
But if you're thinking this was an easy or casual decision for the high school junior, think again.  If she had entered the regional race and won, it would have been her first time competing for the state championship.  Although she and her coach tried to reason with different race officials, asking if she could just be assigned another number, they were refused all three times.  Yet Codie was unwilling to sacrifice her religious beliefs for personal rewards.  She accepted the officials' ruling and is now focused on next year, and as her local newspaper reported, "ready to keep running, without running away from her beliefs."
So how many of us would have yielded to the temptation to just ignore the obvious, and pursue what would benefit us?  Would you have told yourself that it didn't really matter?  That God wouldn't care?  After all, He knows that you don't agree with the symbology behind that evil number.
I think it's interesting that there is beginning to be a noticeable disparity between those who will stand firm in honoring God, and those who are willing to let the scale of righteousness slide in order to gratify themselves.  The gulf between God-lovers and Self-lovers is widening.  And it is humbling to see the boldness in which the faithful make their stand.
I am greatly encouraged that one as young as Codie Thacker knows where her allegiance lies.  I truly believe that God is beginning to separate the wheat from the tares; and through His grace, mature believers like Codie are revealing the fruit of the Spirit in their daily lives.  It is through true and unwavering faith like hers, that we can truly imagine the kingdom of heaven on earth.

Hebrews 11:6      "And without faith it is impossible to please Him, for whoever would draw near to God must believe that He exists and that He rewards those who seek Him."

Email ThisBlogThis!Share to TwitterShare to FacebookShare to Pinterest
Labels: Faith, Our Youth