I just love it when God validates His Scripture by showing me how to connect the dots!  That's why, today, I want to show you something that I have discovered as I once again begin reading the Bible from Genesis through Revelation.  I am always delighted when a verse that I have passed over suddenly speaks to me anew.  And that is what happened in the 12th Chapter of Exodus.
This is the familiar story of God preparing the nation of Israel for departure from Egypt after 400 years of slavery.  Pharaoh and the land of Egypt have suffered through ten plagues, and the Pharaoh has finally agreed to let God's people go.  In preparation for their departure, the Lord instructs Moses on how the Israelites are to prepare for the Passover; literally the passing over of their homes by the Angel of Death, the final plague.
They are instructed to kill a lamb without blemish, administering its blood across the upper and side door posts of their homes.  They are then to roast the lamb and eat it, along with unleavened bread and bitter herbs.  But God wants them to consume this lamb in a very specific manner, which he relays in Exodus Chapter 12, verse 11:

By following God's specific instructions, the Israelites would be protected from Egypt's eventual pursuit.  As I re-read this familiar Old Testament story, I was suddenly struck with the similarity to one of my favorite passages in the New Testament.  In fact, I have recently begun reciting this series of verses each morning before I slip out of bed.
I'm sure that you will recognize the passage I'm talking about.  It is the well-known Scripture about putting on the armor of God.  In Ephesians 6:10-17, the Apostle Paul instructs Christians how to conduct and protect themselves from spiritual conflict with forces of evil:


10 Finally, my brethren, be strong in the Lord and in the power of His might.
11 Put on the whole armor of God, that you may be able
to stand against the wiles of the devil.
12 For we do not wrestle against flesh and blood, but against principalities,
against powers, against the rulers of the darkness of this age,
against spiritual hosts of wickedness in the heavenly places.
13 Therefore take up the whole armor of God, that you may be able to withstand
in the evil day, and having done all, to stand.
14 Stand therefore, having girded your waist with truth,
having put on the breastplate of righteousness,
15 and having shod your feet with the preparation of the gospel of peace;
16 above all, taking the shield of faith with which you will be able
to quench all the fiery darts of the wicked one.
17 And take the helmet of salvation, and the sword of the Spirit, which is the word of God; 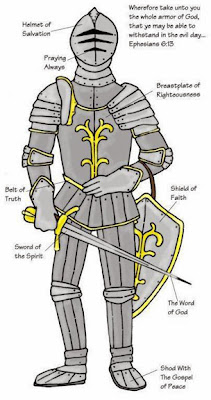 Notice the similarities?  Since God is Immutable and his character never changes, the significance of the instructions in Exodus will be the same as those that occur in Ephesians.  He has always instructed His followers to gird themselves with His truth; embrace His gospel of peace; and put their faith in Him.  In both the OT and NT, these tenets are represented by the belt, the sandals and the shield (or staff).

As the Israelites escaped their bondage in Egypt (which represents bondage to sin), they were to partake of the unblemished Lamb of God (which points to Jesus) and trust in their deliverance by embracing Truth, Peace and Faith.  This was the protective armor that God gave them when they symbolically threw off the yoke of sin.  But it was incomplete armor because they had not yet received Christ, and He had not manifested Himself on earth.
Now in the New Testament, Paul reminds his brothers in faith that we are waging a spiritual battle against forces of evil, and we must now employ the full armor of God, which adds a helmet of Salvation and a Sword of the Spirit, which is the Word to the Belt of Truth, the Sandals of Peace, and the Shield (Staff) of Faith.  Do you see the difference?  God has given us His full protection from Sin by adding Salvation and the Word to our suit of armor.  And those only became available to us after Christ came to pay the price for the sins of all mankind.  Christ IS our Salvation and the Word, and He is the only way to be fully protected from the dark spiritual forces that threaten to return us to our bondage of sin.
As I seek to gain more insight into God's revelation to us through the Bible, it is becoming ever more obvious that it all points to Jesus.  He is the answer to this sinful world, and will, inevitably, reclaim it for Himself.  In the meantime, we can feel the spiritual battle between the forces of Good and Evil that is waging in the heavenly realms.  It is important that we put on the full armor of God, which is Salvation through Christ.  He is the Word of God and it will be His Sword that ultimately defeats our spiritual enemies.
Posted by Pam Kohler at 7:00 AM