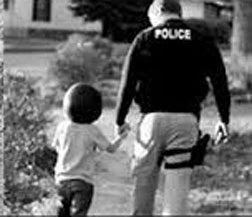 The acronym for Operation Underground Railroad also serves as their motto .... O.U.R. Children.  Just what is this worthy organization and why do you need to know about it?  We all know that the original Underground Railroad was a network that existed in nineteenth century America to liberate African slaves. It consisted of secret routes, safe houses, and undercover operatives who would infiltrate the plantation, often pretending to be slaves themselves, then stealthily conduct the captives out of bondage. We often congratulate ourselves for having eradicated nineteenth century slavery. But it has not been eradicated.  It is uglier than ever.  Its victims today include nearly two million precious children in the world.  They are sex slaves!
And just as it happened a century and a half ago, brave men have made it their mission to rescue these children who are abducted and sentenced to a life of bondage.  Only this time, using cutting-edge computer technology and human intelligence, they are undercover teams of former CIA and Special Ops personnel who go into the darkest corners of the world to help local law enforcement liberate enslaved children and dismantle the criminal networks.
All you have to do is go to their website (operationundergroundrailraod.org) to read the passion with which these men dedicate their lives to saving children.  Let them tell you in their own words:  These poor children are abused daily, thousands of them being imported every year into developed countries like the United States and Canada. These children range from toddlers to teenagers. People have been talking about this problem for some time. But these children don't need more talk. They need action. They need to be extracted from the hell they are living in. We know how to extract them. This is what we do. We rescue them and place them into safe havens where they can be rehabilitated. Then we go after the bad guys and break their organizations. Help us do this. Help us help the children.
They have gathered the world's experts in extraction operations and in anti-child trafficking efforts. They are former CIA, FBI, Navy SEALs, and Green Berets. They make up what is called the Underground Jump Team. While the United States government is leading the world in such operations, it is largely hindered by bureaucracy and jurisdictional limitations. If there is no U.S. statute being violated, then no U.S. action can be taken. Because most of these suffering children fall outside of U.S. jurisdiction and often find themselves kidnapped and abused in regions where the resources to save them are scarce, it is time for private citizens and organizations to rise up and help. It is our duty as a free and blessed people. As the operatives, themselves, ask, "If not us, who?"
They have partnered with private software and data mining companies who have developed cutting edge tools to locate and detain international child trafficking organizations. Over the last decade these tools have led to the rescue of thousands of children and to the apprehension of thousands of pedophile captors. (Note: These tools do not violate privacy rights, as they only mine data that has been publically disseminated by those seeking to sell children.) Sadly, these tools have only been utilized in developed countries, leaving those infected nations with the most enslaved children to fend for themselves. It is the goal of the Underground Jump Team to end this. Partnering with government jurisdictions throughout the world, they will provide these tools free of charge, and will work side by side with our foreign partners until the children on the other end of that dark Internet line are liberated.
Here is just one of the success stories from Costa Rica:  After Underground Jump Team members learned that children were being sold for sex to Americans in Jaco Beach, Costa Rica, they deployed there. They spent several weeks pounding the pavement in an undercover capacity, and eventually managed to infiltrate the organizations providing the illicit sex. Working with local authorities, two American individuals were arrested as a result of this mission.
The child sex business and pornography have become a multi-million dollar business and money is made at the expense of victims who are children ranging in age from toddlers to teenagers. People have been talking about this problem for some time. But these children don't need more talk. They need action. They need to be extracted from the hell they are living in, and these brave men are determined to be their rescuers.  I urge you to go to their website and read the entire story and help them stop the child sex slave trade.

Visit www.operationundergroundrailroad.org and donate to this worthy cause.

Matthew 18:10    "Take heed that you do not despise one of these little ones, for I say to you that in heaven their angels always see the face of My Father who is in heaven."