Several months ago, I wrote a post about my experiences in taking a Travis Haley gun class.  It was here that I was first introduced to the science behind shooting.  That's right.  Travis Haley isn't satisfied with teaching his students the fundamentals of shooting.  He's on a mission to discover the Why's of shooting excellence; the interaction between thoughts and performance.  Because once you figure that out and truly understand it, you've got the edge.  And Travis is all about gaining the edge.
So, when I signed up for his D5 Reactive Shooting Science class, I was curious as to how he would advance us beyond the incredible improvements I saw in my shooting from the previous class.  So along with PLW (my husband's full name actually means "Peace-Loving Warrior, for those new to my blog) and 24 of my new best friends, we set out on our next journey with the Master... learning the principles behind Biomechanical shooting and then putting them into practice. 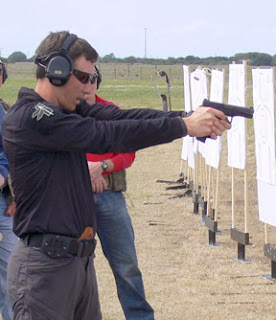 I could write volumes on the information we gained ... Controlling motion, force, momentum, levers and balance; Isometric tension; the Tachypsychia Effect; Target accommodation;  the 90/10 theory of trigger control; the front and back end problems that interfere with our accuracy, including the pre-ignition push, snatching, improper reset, lack of follow through, and double pump, just to name a few .... and all designed to make us better shooters.
But when you take a class with Travis, you're signing up for so much more than a training class.  I knew what I expected out of the class, but I had no idea how life-changing three days with this man could be.  I believe that life is a series of pivot points, where our decisions lead us to specific events that move us forward on our path through life.  This class was such a pivot point for me, and I think all my classmates would agree.
First of all, this class is formatted differently than any class I've ever experienced to date.  It is a big picture, big idea thinkers class.  How many other training classes have you taken that discuss the Law of Overcoming Failure, the Law of Just a Little, or the Law of Everything? -- or as he calls them, "Travis's Cheesy Laws".  Or what other firearms trainers recommend books like The Power of Habit or extol the Kolbe A™ Index/Instinct Test, which measures what you WILL or WON'T do?  You see, for Travis, it is about the deliberate practice of analyzing processes to achieve your goal.
Personally, he was able to isolate and see the imbalance in my trigger pull by observing the tension in the muscles of my hand.  He talked me through the pull and helped me to visualize what I was doing, and then suggested, "Feel that?  Remember how that feels in your mind every time you pull the trigger."  It is that kind of attention to detail, along with the quest for solutions to problems that will lead to success.   And that pertains to not only your gun handling, but your life.
This class has been built on one man's quest to try and obtain a personal level of perfection, based on a one-word question ... WHY?  It is Travis's unique ability to press for the "why" behind every aspect of his life that has been the impetus for propelling him to the top of whatever he chooses to accomplish.
Having served as a Force Recon Marine, Travis was a member of a select group of warriors who possessed the highest of standards and a broad skill set.  This has, no doubt, been the foundation of Travis's training and what attracts shooters who want to train with him.  His military experience and knowledge is a huge asset.
You might think that his obviously effective military skills could provide us all the answers to our performance issues.  But by asking "why" our bodies react the way they do, Travis has looked to a cadre of other disciplines for the solutions to our problems; and that includes yoga, biomechanics , the nature of horses, and the lifespan and characteristics of a dragonfly.  The "artist's curse" of never achieving the perfect painting, along with brain mapping, psychology and many other fields of study all come together to create a better shooter and a better person.
I realized that all the previous training I have received was based on specific systems of shooting (or as Travis refers to them, "recipes").  The specificity of those systems is inherently limiting, and by accepting these fixed and absolute systems, I am accepting their limitations and I stop growing as a shooter.  Systems, by their very nature, put you in a box--- and we all know that you can't grow inside of a box.

The bottom line is this:  Travis Haley is changing lives, creating thinkers, and smashing boxes.  In fact, I see the future of training heading in Travis's direction, and perceive the slow death of other "system"-based gun classes (some of which I have personally trained under).  They haven't had a format change in 10 years!  And if they do make a change, it's just a superficial change to the system, like changing the color of the inside of the box to red.  With Travis, I've backed the truck over the box.
He has shown me how to problem-solve on my own, and I now understand the "why" of fundamentals.  I can use my brain (first) in a dynamic situation, and then use the gun, if I have to, as an effective tool.  It is apparent to me that Travis Haley is playing 50 moves ahead of these system-based trainers.  Their inability to change will be the death of their programs.  Eventually, the shooters who are in search for perfection, rather than a system of shooting, and are willing to learn outside the box, will find his doorway.  And when they do, they will know they're home.
As with any Travis Haley class, you will not only become a better shooter, the class makes you a better mom, a better CEO, a better spouse, a better thinker, a better YOU.  Alongside Travis, you can step into shooting and thinking, and improve other aspects of your life, as well.  PLW is incorporating aspects of Travis's training into his painting, and the class will undoubtedly have an impact on my writing.
In the final analysis, Travis Haley's military life and career has let him see behind the curtain.  He is trying to prepare his class members for a tough and trying world; one that is descending upon us rapidly. He has seen the beast that we all know we will have to face.  Our world is changing and Travis is trying to teach us how to survive in that world, by first using the organic computer God has given all of us.  If you simply want to be a good shooter, then by all means, settle for a system of shooting that will meet those needs.  But if you want to be schooled in how to deliberately analyze the processes of your shooting in a never-ending pursuit of perfection, and encounter your own pivot point while experiencing a life-changing adventure, then hitch your wagon to Travis's star.  He'll take you places you've never been.

Ecclesiastes 7:25    "I applied my heart to know, to search and seek out wisdom and the reason of things, to know the wickedness of folly, even of foolishness and madness."