I'm sorry if you are tired of hearing me lambast the Common Core education initiative.  But until every American parent is aware of the full implication of this propaganda machine, i will keep on sounding the alarm.  But now, thanks to an article on The Blaze website, I have the words of one high school student that can articulate the dangers of this program much better than I. 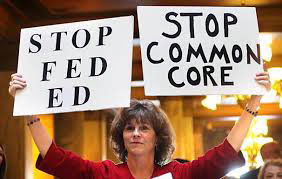 But first, you need to know that officially, the Common Core State Standards Initiative is an approach to education in the United States that details what K-12 students should know in English and math at the end of each grade. The initiative is sponsored by the National Governors Association (NGA) and the Council of Chief State School Officers (CCSSO) and seeks to establish conformity in education standards across the states.  Remember, that both of these organizations have been involved in either the development or the implementation of Common Core.  Plus, we can't forget that this is the, ahem, official version.
In reality, Common Core is designed to push an education agenda that conforms to a Progressive ideology, and limits not only the individuality of our children's learning processes, but seeks to determine exactly what they are taught.  But, here, let me give the floor to Ethan Young, a student at Farragut High School in Knox County, Tennessee, who makes his case as to why he believes his school district should drop the new national education standards, a set of guidelines that were never voted on by Congress, the Department of Education nor by local or state governments.
Speaking at a local school board meeting, Ethan said, “The president essentially bribed states into implementation via ‘Race to the Top,’ offering $4.35 billion taxpayer dollars to participating states, $500 million of which went to Tennessee.  And much like No Child Left Behind, the program promises national testing and a one-size-fits-all education, because hey, it worked so well the first time.”
“If nothing else, these standards are a glowing conflict of interest and they lack the research they allegedly received,” he added.  Young also argued that Common Core standards display a “mistrust of teachers,” a line that prompted applause from the audience.
“I stand before you because I care about education, but also because I want to support my teachers,” he said. “And just as they fought for my academic achievement, so I want to fight for their ability to teach. This relationship is at the heart of instruction, yet there will never be a system by which it is accurately measured.”
Ethan went on to argue that “standards-based education is ruining the way we teach and learn.” He also revealed that legislators and administrators have told him “that’s just the way things work.”  Now, he’s daring to ask: “Why?”
“I’m gonna answer that question: Bureaucratic convenience,” he added. “It works with nuclear reactors, it works with business models, why can’t it work with students? I mean how convenient, calculating exactly who knows what and who needs what. I mean, why don’t we just manufacture robots instead of students? They last longer and they always do what they’re told.”
"The problem is," Ethan continued, “education is unlike every other bureaucratic institute in our government” because the “task of teaching is never quantifiable.  If everything I learn in high school is a measurable objective, I have not learned anything,” Young proclaimed. “I’d like to repeat that. If everything I learn in high school is a measurable objective, I have not learned anything.”
Government bureaucrats will never be able to measure “creativity, appreciation, inquisitiveness” but they are the “purpose of education,” he lectured.  (Smart kid!)  “Somewhere our Founding Fathers are turning in their graves — pleading, screaming and trying to say to us that we teach to free minds. We teach to inspire. We teach to equip; the careers will come naturally.”
Ethan Young is obviously astute at figuring out the deficiencies in the Common Core standards.  But he's not alone.  In Oregon, parents fed up with their kids’ declining math grades under newly adopted Common Core standards took an unorthodox step to remedy the problem: They pulled their children out of school for an hour a day to teach them at home.  One seventh-grader had always been an “A” student in math until this year when she brought home a “D, according to her mother.  Another mom said her daughter, previously a sold “B” math student, is now failing the subject.
Of course, the elementary school principal where these girls attended said he’s "not surprised some students are struggling, as Common Core math standards call for fewer numbers and formulas and more word problems and real-world scenarios, along with more group work." 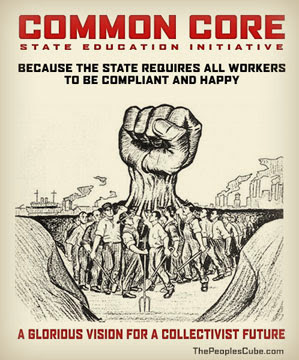 Let me decipher that for you: one Common Core educator took an ordinary lesson about calculating the area of a circle, and turned it into an analysis of the South Central Los Angeles community that rioted after the 1992 “Rodney King” verdict.  Students learned that in 1992, South Central L.A. had no movie theaters or community centers, but it had 640 liquor stores. That led one student to conclude, “All they want them to do is drink.” (the student never thought to ask who “they” were.)  With encouragement from their teacher, the purpose of the Common Core curriculum was to get most students to decide, “We should have more jobs and more community centers, then you wouldn’t have to worry about riots,” and “The government should put more money in (South Central).”  Get it?  Multiplication tables and math problems have been replaced with social justice agendas and propaganda.  (Click on the link to this post to see more examples of this outrageous initiative).
So it is not as U.S. Secretary of Education Arne Duncan reportedly said -- that some of the opposition to the controversial Common Core State Standards is derived from wealthy white mothers upset to learn their children are not as bright as they thought.  According to the Washington Post, Duncan told a group of state schools superintendents he found it “fascinating” opposition comes from “white suburban moms who — all of a sudden — realize their child isn’t as brilliant as they thought they were and their school isn’t as good as they thought it was.”  (And this is the Secretary of Education????)
The bottom line is this:  our kids need to know the basics in math and english; they need to know how to use their minds to balance a checkbook, and to argue their position on any given subject.  They DO NOT need to be fed a steady diet of biased or misleading political points of view.  What you don't realize is that this dangerous curriculum could be in your schools and you are not even aware of it!  I urge you to investigate for yourselves and root it out before your children pay the price of our apathy and unresponsiveness.

Isaiah 28:9    "Whom will He teach knowledge? And whom will He make to understand the message?"