No More Brown Baggin' For The Kiddos! 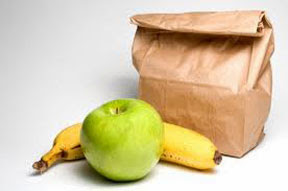 I guess I shouldn't be surprised at the article I read on the Healthy Debates website; it's just another nail in the coffin of freedom, and this time, it is our children who will pay the price.  The site reported that a Richmond, Virginia mother received a note from her child's preschool, telling her not to pack a lunch for her child.  The note read:  Dear Parents, I have received word from Federal Programs Preschool pertaining to lunches from home. Parents are to be informed that students can only bring lunches from home if there is a medical condition requiring a specific diet, along with a physicians note to that regard.  I am sorry for any inconvenience. If you have any questions concerning this matter, please contact blah, blah, blah....  So it looks like the days of swapping little Johnny's PB & J for Becky's Bologna & Cheese; or sharing some of Grandma's home-made brownies with your friends has gone the way of the hoola hoop and dodge ball.
But it is not merely schools in Virginia that are affected.  Apparently any subsidized preschools (think Head Start programs) are subject to this inane ruling.  The purported reasons for this policy include:
•  They are a publicly subsidized program with mainly low-income families and they want to ensure that the children are receiving healthy meals that meet recognized federal nutritional guidelines. Parent supplied meals are often lacking in nutritional balance. (For example, in one field trip where parents did supply meals, one child's "meal" was 3 different bags of chips.)
•  Another reason is due to allergies. They have a protocol that they have to follow to prevent children from coming into contact with foods that they have an allergy to, and it's much harder to do this with meals brought from home as they have no way to verify ingredient lists or keep track of every child's meals.
•  Another is storage and preparation. They have little staff time or space to devote to meal storage and preparation, and keeping track of dozens of home-brought meals would cut into the time available for meal prep.
•  Finally, there are liability concerns. They have no way to assure the food safety for a home-brought meal, as they don't know how it was prepared or stored prior to arrival. Yet a parent may put blame on the school for improper storage if a meal is spoiled and sickens their child.
Awww, it's all about the welfare of the children, right?  Think again!  When you look deeper, you find that, as usual, it's all about the money --- oh, yeah --- and let's not forget the control factor, too.  This is how it works: Agricultural surplus is used to provide a base of food which is provided to the schools free of charge. It is then turned into processed junk for the public school system while the food manufacturers profit. The National School Lunch Program, enacted in 1946, has a mission besides just feeding hungry children: to subsidize the agricultural business by using up beef, cheese, and pork. The school lunches are loaded with these artery-clogging ingredients, in the most processed forms possible.
In fact, an article in the NY Times exposed the charade:  The Agriculture Department pays about $1 billion a year for commodities like fresh apples and sweet potatoes, chickens and turkeys. Schools get the food free; some cook it on site, but more and more pay processors to turn these healthy ingredients into fried chicken nuggets, fruit pastries, pizza and the like. Some $445 million worth of commodities are sent for processing each year, a nearly 50 percent increase since 2006.
And here's how the food processors profit .... The Agriculture Department doesn’t track spending to process the food, but school authorities do. The Michigan Department of Education, for example, gets free raw chicken worth $11.40 a case and sends it for processing into nuggets at $33.45 a case. The schools in San Bernardino, Calif., spend $14.75 to make French fries out of $5.95 worth of potatoes. 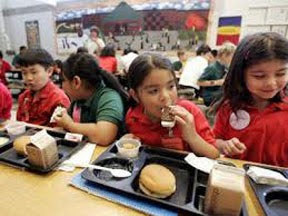 So, is it really about benefitting the kids?  I'll let you decide.  The Center for Science in the Public Interest has warned that sending food to be processed often means lower nutritional value and noted that “many schools continue to exceed the standards for fat, saturated fat and sodium.” A 2008 study by the Robert Wood Johnson Foundation found that by the time many healthier commodities reach students, “they have about the same nutritional value as junk foods.”
School management companies are saving money by not paying skilled kitchen workers, while the food processors pay these same management companies rebates in return for contracts (usually around 14%).  So don't tell me that these programs are instituted out of the desire to help our most vulnerable citizens, poor children.  These kinds of bleeding heart policies are really designed to line the pockets of corporations while sacrificing the health of our nation's children.
As the article states, "Now, at least one school wants children to have a doctor’s note to say "no" to the school lunch offerings of hormones, GMOs, preservatives, and grease. They must have the permission of a professional to avoid junk food. A parent’s good judgement is not sufficient, it seems, to make the healthy decision to provide a toxin-free lunch.  By controlling the food that our kids eat, the federal government is controlling their entire lives, right down to their ability to think critically, their future fertility, and their overall lifespans."
Think about it.  This is a typical week's menu at these federally-subsidized preschools:  Corn dog or chicken nuggets; tater tots; Beef tostada boat or PB and J on white bread; Pepperoni pizza or fish sticks with roll; Pretzel sticks with cheese sauce or chicken teriyaki; Cheeseburger or breaded chicken patty with seasoned fries.  There is not one thing on this list that falls into our normal diet. Add a side of rBGH-filled milk and a corn-syrup laden “fruit cup” and you have a complete nutritional disaster.  Why not just serve up a side dish of diabetes, obesity, arthritis and cancer?
In the end, Healthy Debates sums it up nicely:  the federal government must have all the little children on board in order to subsidize the farmers, make the rich richer, and make the poor sicker. Throw in some Obamacare to treat the resulting nutritionally-driven illnesses and it is a win-win situation – at least it is if you own a food processing plant, a medical facility, or a factory farm and you’re not the ones eating that so-called food.  Lunch anyone?

James 2:15-16      "If a brother or sister is naked and destitute of daily food, and one of you says to them, “Depart in peace, be warmed and filled,” but you do not give them the things which are needed for the body, what does it profit?"
Posted by Pam Kohler at 7:00 AM