The Dynamics of Prepping

An article on the CNN Money site recently caught my eye.  The writer attended a Prepping Expo in Florida at the beginning of the month, and it led to some interesting conclusions.  According to the piece, "More and more Americans are spending money to get ready for an uncertain future -- gathering food, water, tools, and skills to help them weather anything from a hurricane to a pandemic. Contrary to images of deluded or gun-obsessed "lone wolves," many preppers are average consumers reacting to concrete worries, and their way of thinking is spreading; fueling an emerging lifestyle trend. That lifestyle is generating demand for a broad spectrum of products offering survival -- or even comfort -- when large-scale systems go down." 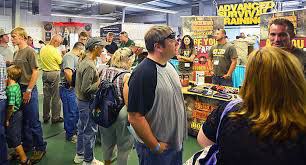 Almost sounds as if "prepping" has gone mainstream, doesn't it?  And in this economically-challenged time, it appears as if a new economic stream is being developed.  And this new industry defies stereotyping; everything from ammunition, crossbows and camping gear, to seed banks, beehives, financial planning, and acupressure.  And the business model seems to be trending upwards.  The average customer is hard to define.  They are no longer red neck, country conspiracy nuts, but the market has broadened to include "suburban homesteaders".  And the reasons they are flocking to this new line of merchandise are as varied as their demographics and the different products.
Ideology contributes to a lot of the differences in buyers.  According to the article, one of the entrepreneurs, Charlie Hogwood of Personal Readiness Education Programs, had this to say about the divergent consumers: "All last year it was up and up and up. But after the [presidential] election, it flattened out." Hogwood thinks that some in the market were overwrought over doomsday scenarios surrounding the reelection of Barack Obama. "Last year, I heard 100 different conspiracy theories" about what a second Obama presidency might mean. But when the election wasn't followed by martial law and FEMA camps, both the rhetoric and the market cooled off a bit. "I rarely hear the crazy theories now. Now everyone's worried mainly about the collapse of the dollar," says Hogwood, referring to widespread prepper fears of hyperinflation triggered by the Federal Reserve's quantitative easing.
And the irony of the various reasons for purchasing items at the Expo were not lost on Mr. Hogwood, either.  "Sometimes it's like a toy store, and people buy stuff because they like it." But in a real survival situation, "the more you know, the less you have to carry. A lot of people don't know much and think they can buy their way out of it." He sees some of the extremism surrounding the prepping industry as hype, maybe even fearmongering. "It's so much more fun to worry about martial law than a hurricane. People like zombies as a marketing tool."
As I read further into the article, it became apparent that not only the writer, but a good number of the companies selling products, didn't really grasp the importance nor the significance of prepping.  For many of them, it just appears as if they are out to make a quick buck in a new market.  They derisively discredit the theories of the Expo attendees, dismissing conversations on the involvement of the Rothschilds and Rockefellers in the Federal Reserve, or the effects of chemtrails on the weather.
So it appears as if good old American greed is still alive and well.  There are lots of business owners who are willing to get their fair share of the shrinking American dollar; more interested in their profits than in any real common interest with their customers.  And then there are the  consumers, always looking for the latest new gimmick or movement to follow.  It was obvious that the writer and many of the businesspeople still view "Preppers" as the lunatic fringe.
Well, the last laugh will be on them.  Let them make their dollar and buy their new toys, but when the SHTF, the true Preppers will  have the last laugh.  A fat bank account will be reduced to pennies, and all those survivalist items won't help if you don't know how to use them.  In the meantime, we'll be glad to take advantage of the fascination with the survivalist lifestyle.  Let their greed be our gain.

2 Peter 3:3-4    "knowing this first: that scoffers will come in the last days, walking according to their own lusts, 4 and saying, "Where is the promise of His coming? For since the fathers fell asleep, all things continue as they were from the beginning of creation."