As I scanned various headlines over the last few days, I noticed a couple of articles on the different ways we do "church" in this nation.  Let me start off by saying, that I know I will be criticized for being "fundamentalist" and "too conservative" and "exclusive".  But I regard the worship and understanding of who God is as significant and consequential; and I feel it should be conducted with respect and reverance, and awe.  And what I am seeing not only disturbs me, but to be honest, saddens me. 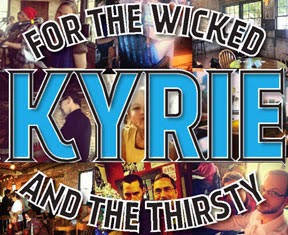 For example, it appears that a small number of mainline churches, concerned with dwindling attendance and looking to break away from tradition, are using beer as a selling point.  Yes, you read that correctly.  Apparently, they feel that this form of worship gives them "the love, the support, and the non-judgmental eyes" they felt was missing from other more traditional church services.
In fact, they will tell you that combining beer with an ancient Greek phrase, Kyrie, has resulted in forming significant relationships around Jesus.  So just what is Kyrie?  It is an expression that found its way into ancient Christian liturgy.  The phrase is the origin of the Jesus Prayer, ("Lord Jesus Christ, Son of God, have mercy on me, the sinner"), which has been a part of Eastern Orthodox Churches for centuries, and is becoming increasingly popular amongst Western Christians. The biblical roots of this prayer first appear in 1 Chronicles 16:34 ... give thanks to the LORD; for he is good; for his mercy endures for ever ...
I get it that the decline of the church in this country demands that we examine what we're doing wrong; why the Gospel message is not being heard --- or taught, for that matter ---.   The slogan of this church is Kyrie:  For the Wicked and the Thirsty; Church in a Pub.  And adherents to this type of non-institutional, thinking-outside-the-box worship service will tell you that fellowship over beer, with an emphasis on the essence of the Kyrie prayer suits them just fine.  After all, the prayer is simultaneously a petition and a prayer of thanksgiving; an acknowledgment of what God has done, what God is doing, and what God will continue to do.  But is it?
The other article that caught my eye was one that touted an obvious and purposeful departure from traditional preaching.  Nadia Bolz-Weber, who in her body and her theology, represents a new, muscular form of liberal Christianity.  It is a theology that merges the passion and life-changing fervor of evangelicalism with the commitment to inclusiveness and social justice of mainline Protestantism. She’s a tatted-up, foul-mouthed champion to people sick of being belittled as not Christian enough for the right or too Jesus-y for the left.  She proclaims that her church (House for All Sinners and Saints), is a Denver, Colorado-based church that’s part of the Evangelical Lutheran Church in America denomination in which tradition and innovation collide, and where “scripture is honored enough to be faithfully questioned and struggled with.”
Stretching the bounds of tradition (nothing wrong with that, per se), Nadia is all tatted up and frequently uses profanity to drive home her theology, which she describes as “progressive yet deeply rooted in theological imagination.”  Now my radar is up.  In her biography, she openly touts "emerging churches" over denominational ones, and promotes her preaching style as "not centered on the pastor."  Apparently it's not centered on God Almighty, either.  When you try to find out what the foundation of their belief system is, their website lists the following:

•  The Gospel matters, liturgy is recontextualized, and we are free to reclaim the word "Christian"
•  We no longer have to culturally commute or bracket out parts of ourselves to be in Christian community
•  We are co-creators of liturgy, rather than just passive participants. Aesthetics and theology both matter
•  The community is both intellectually and spiritually stimulating
•  We provide a connection or a bridge to the traditions of the church 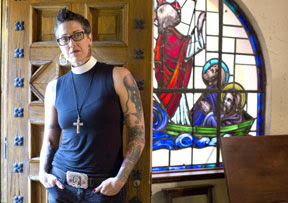 In describing how she conducts the service at her church, Pastor Bolz-Weber says, "We follow the ancient liturgy of the church (chanting the Kyrie (there it is again!), readings from scripture, chanting the Psalm, sermon, prayers of the people, Eucharist, benediction, etc.) We also sing the old hymns of the church."  And she portrays her congregation as "a quarter of us identify as Lutherans; the rest are post-Evangelicals, Methodists, agnostics, Reformed, Episcopalian, and the ever-popular "nothing". Actually, it's pretty easy to look around on any given Sunday and think, "I'm unclear what all these people have in common."
My point, exactly! What I see in these two deviations from tradition are self-centered individuals with neither reverence, awe, nor fear of God.  It seems that these "churches" encourage their attendees to have a big view of themselves, and a small view of God.  They seem more concerned about making themselves feel good, than pleasing the God of the Universe.
Don't get me wrong, I'm all for examining the failure of the modern Church in America.  The Lord knows that it has failed the Great Commission given to it by Jesus.  But does anyone see any mention of God in either of these new forms of worship?  I'm sorry, but chanting a repetitive verse (which is what this Kyrie looks to be) DOES NOT adequately "acknowledge what God has done, what God is doing, and what God will continue to do."  Where is the mention that He requires repentance for His mercy?  Where is the indication of His righteous judgment against those who do not follow His commandments?  Yes, He sent His Son, who offers Grace.  But read ALL the New Testament, and you will find that He plays a very important role at the End ... He will come to Judge, whether or not that fits with His makeover that these churches would like to conduct.
The Church in America is straying ever further from God.  This is surely evidence that people only want their ears "tickled"; they want their needs met, rather than seeking to know the Biblical God and what He desires.  What is perhaps the saddest fact of all, I don't think they really want to know Him.  They only want to satisfy themselves.
Yes, He is a loving, merciful God; but He is also an Immutable God.  He does not change.  He is the same "traditional" God that these churches are fighting so hard to separate themselves from.   Learn who that God is, and you will find that you don't need new ways to relate to Him.

2 Timothy 4:3    "For the time will come when people will not put up with sound doctrine. Instead, to suit their own desires, they will gather around them a great number of teachers to say what their itching ears want to hear."