BOOK REVIEW: When Will The Heaven Begin?

It is very rarely that I write a book review with tears streaming down my face.  But this one is personal.  In late 2011, I wrote a blog post about a young man that I was so blessed to have in my life.   PLW and I were present when Ben Breedlove left this troublesome earth for the phenomenal peace he had experienced in heaven.
You might have heard his story .... he lived for 18 years, struggling with the effects of Hypertrophic Cardiomyopathy (HCM), a debilitating heart condition that was destined to cut short his promising life.  When he suddenly died on Christmas night, 2011, he left behind a touching video that told of his struggles and of a recent "vision" in which he had visited the "waiting room", so to speak, of heaven during a traumatic incident in which his heart failed.  Call it a "life during death" experience, if you will.  That video, which ends with Ben's question, "Do you believe in Angels or God?  I DO", immediately went viral, and has been seen by millions around the world. 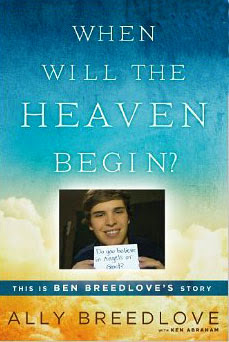 And now, his older sister, Ally Breedlove, has written a book about her brother, called When Will The Heaven Begin?, in which she details the incredible influence Ben had on others.  The book is so much more than another in the series of "near death experience books" that our culture clings to and is pre-occupied with.
Ally has written honestly and poignantly about the effects Ben's condition had on him and the family.  Yet, she represents Ben's life as full and vibrant; there is no feeling sorry for themselves or asking "Why?".  And although Ben's life was punctuated with several near-death health scares, the family's faith in God and their wish that Ben live a life as free and uninhibited as he could took precedence.
As Ally recounts the ups and down, and the hopes and fears of the family concerning Ben's health and his future, one cannot escape the realization that this book is not only a tribute to Ben and his amazing kindness, generosity and courage; but it is a book that is meant to inspire us all through any difficulties that we may be facing.
As both the author, and his sister, Ally is successful in showing us how her brother and her family were able to live one day at a time, thanking God for his grace, and accepting that He was in control of Ben's life.  They came to understand that each life, no matter how short, is to be lived with purpose and not to be wasted.  Ally shows us how Ben did just that.
She gives us a full picture of her brother: you will melt at the sight of Ben's irrepressible smile; laugh at his pranks and ever-present mischievous personality; be impressed with his talent and ingenuity; and you will grieve at what might have been from this talented and compassionate young man.   It is quite apparent that Ben lived more in his 18 years than do many in a lifetime.  I feel like I have lived so much of this story, but Ally brings such insightful and perceptive analysis of God's presence through life's joys, as well as difficulties, that I found myself receiving new revelations of what life is all about.  This is more than a "feel good" book.  You can bask in the reflection of God's love for each of us that the life of Ben Breedlove represented.
I would imagine, that like Ben, many of you feel that your future is uncertain (and who doesn't in today's world?).  Let this book show you that we must go on living; that our lives have purpose; that there is peace in the face of trouble; and there is a promise of an eternal home.
In the end, Ally Breedlove carries on her brother's legacy.  In the video that moved the world to re-examine their relationship with God, Ben shared his hope of heaven.  Now, in her book, Ally lays down her own challenge: she has written Ben's story.  How will you write yours?