Look What Happens When the Government Spends Less

At the end of last month, the U.S. Treasury Department that the government has, for the first time in five years, run a budget deficit below $1 trillion.  The deficit for the 2013 budget year totaled $680.3 billion, down from $1.09 trillion in 2012.  That’s the smallest imbalance since 2008, when the government ran a $458.6 billion deficit.
I am not an economist, and maybe I see this whole scenario all wrong .... but it's really very simple to understand ... this deficit is the difference between tax revenue and spending. The deficit for the budget year that ends on September 30th narrowed because spending decreased while tax revenues increased.  Naturally, the White House is eager to take full credit for this decrease in spending. 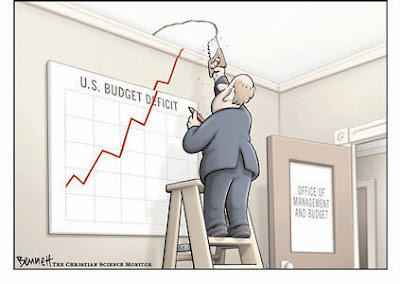 “Under President Obama, the nation’s deficit has fallen for the past four years, the fastest pace of decline over a sustained period since World War II. It is now less than half of what it was when the President took office,” said Treasury Secretary Lew. “Congress must build on this progress by crafting a pro-jobs and pro-growth budget agreement that strengthens the economy while maintaining fiscal discipline.”
“We must remain focused on measures that will support the middle class, strengthen the economic recovery, promote the nation’s long-term competitiveness, strengthen national security, and protect the least fortunate among us,” said Office of Management and Budget (OMB) Director Sylvia Burwell. “The President’s Budget showed how we can do this while at the same time improving our long-term fiscal outlook.”
Excuse me??? The President's Budget?  Isn't it a little presumptive to take credit for a decrease in spending, when in fact the deficit had risen $221 billion between 2008 and 2013, the years that Mr. Obama has been in office?
Now, I don't mind giving credit where credit is due, so let's take a closer look at just what caused this decrease in the federal deficit.  It seems that revenue did indeed jump 13.3 percent to $2.77 trillion.  But why?  Oh, here's our answer ... higher tax rates.
And, yes, government spending declined 2.4 percent to $3.45 trillion.  Again, one must ask the reason this occurred.  Well, it was, in part, because of the automatic spending cuts that kicked in March 1st (also known as “sequester”).  Hmmm .... wasn't the Administration loudly berating the Sequester; predicting that it would lead to massive layoffs and the cutting of programs that would hurt the poor and the elderly?
Maybe I am over-simplying the whole process.  But it just seems so obvious:  when you spend less, you owe less, and save more.  At this point, don't we need to take a sober and serious look at how Washington handles the business of the country?  Although I will admit that Sequestration may have limited some valuable programs, and led to unfortunate layoffs; if we are truly honest with ourselves, we would admit that at least some of what we've asked government to do, we are better able to do ourselves.  We have become too reliant on government to take care of us, cradle to grave.
And the fact that the bloated bureaucracy of the Federal Government would be part of the job layoffs should probably be looked into more closely.  Just how many of those jobs are essential?  Should the American taxpayer be burdened with the cost of paying for health and retirement programs of non-essential workers?
I want to make it clear that I am thrilled our budget deficit has dropped $1.09 trillion!  But let's not be satisfied with that achievement.  Let us cut deeper and make it possible for American business entrepreneurs to afford their taxes so that they can create more job opportunities, which will result in more taxpayers  --- the American economy and everyone will benefit.  But, I'm sorry to say, that this is just a drop in the bucket, and I'm afraid too little, too late.

Luke 14:28     "For which of you, desiring to build a tower, does not first sit down and count the cost, whether he has enough to complete it?"