This Is What Journalism Is Meant To Be!

I never thought I would say it, but I have to give proper accolades to the CBS News program, 60 Minutes.  This show is usually just another mouthpiece for whatever the "powers to be" want disseminated.  But Sunday evening, reporter Lara Logan delivered the first of what I hope will be a torrent of information on the Benghazi debacle.
Ms. Logan is a South African television and radio journalist, and war correspondent. She is the chief foreign affairs correspondent for CBS News, and an occasional correspondent for 60 Minutes.  And she is fast becoming known for her character and unwillingness to back down from a story.  In other words, she has journalistic integrity; something that, in my opinion, is missing from a large segment of journalists.
In late January 2007, Logan filed a report of fighting along Haifa Street in Baghdad, but the CBS Evening News did not run the report; deeming it "a bit strong". To reverse the decision, Logan enlisted public support; requesting them to watch the story and pass the link to as many of their friends and acquaintances as possible, saying "It should be seen". Logan later used the Haifa Street material for a 60 Minutes' report on Baghdad during the surge.  She is also known for speaking out on the prevalence of sexual assault in Egypt, and the sexual violence women reporters are reluctant to report in case it prevents them from doing their jobs.  She, herself, was the victim of sexual assault while covering the Egyptian Revolution.  Now she has turned her attention to Benghazi. 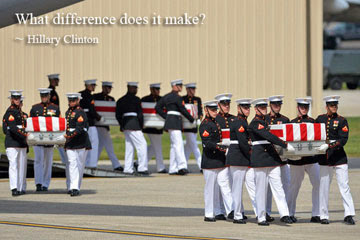 On Sunday night, her segment of the news program delivered a powerful blow to the ridiculous Administration rendition of the Benghazi events on the night of September 11th, 2012; the version of the story that was propagated by the White House Press Secretary, the U.S. National Security Advisor, the Secretary of State, and even the President himself at a U.N. appearance.  In one fifteen-minute presentation, Lara Logan shattered the pretense that a video incited a rabble of random protestors into a murderous mob that killed our Ambassador and three others.  She helped the truth to finally emerge.
We heard from a British military defense contractor, who realized from the start of his assignment that the Libyan security forces were inadequate and would not stand and fight to defend the Americans.  He was on the ground that night, and actually talked by phone to one of the personnel in Ambassador Stevens' compound --- during the attack!  He raced to the compound to find it ablaze, and then snuck in to the hospital to try to find the Ambassador.  He saw him lying dead in a room.
Green Beret Commander, Lt. Col. Andy Wood, recounted his numerous dispatches to the State Department and Department of Defense, warning them an attack was imminent.  They had the information from Al Qaeda internet warnings that the Red Cross, the British Consulate and the American compound would be attacked.  This information was passed on up the line to the highest offices of our government.  When the terrorist organization made good on the first two of their targets, it was only a matter of time before they came for the third; the Americans.  Warnings that security was inadequate came from all those involved-- the British military contractor, Lt. Col. Woods and even the Ambassador himself.  The message was clear:  they were being targeted.  All such warnings were ignored.
Lt. Col Wood went on to say that there is no doubt this was a well-coordinated and staged attack.  The accuracy with which the mortar rounds that killed Navy Seals Glen Doherty and Tyrone Woods were launched was equivalent to "getting a basketball through the hoop, over your shoulder."  When asked what it took to pull off such an attack, he was clear:  "Coordination, planning, training, experience of personnel and practicing those things; they knew what they were doing.  That was a well-executed attack." Kind of dispels the whole lame "Video" scenario spewed by the White House, doesn't it? 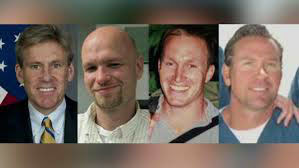 Ms. Logan also interviewed Greg Hicks.  You might remember him from his emotional testimony before Congress on the events surrounding Benghazi.  While the testimony was riveting and very informative, it has resulted in no further investigation, to my knowledge.  That's why I was encouraged by his appearance in Ms. Logan's piece.  If Congress won't do it's job, then perhaps the Media will come to its senses and do what it is supposed to do... give the American people the truth.
As the brave Deputy Chief of Mission in Tripoli, Libya, Mr. Hicks tried desperately to get military aid to those under attack in Benghazi.  He was actually on the phone with Ambassador Stevens, during the attack, when the line was cut.  "The sound of his voice is indelibly imprinted on my mind.  He sounded frightened."  He didn't flinch when she asked him what his thoughts were about being told no help was coming.  His reply was chilling and direct.  "For the people that go out, and onto the edge to represent our country... we believe that if we get into trouble, they're coming to get us; that our back is covered.  To hear that it's not, is a terrible, terrible experience."
So now that Lara Logan and CBS News has shined the spotlight on the Benghazi prevarication that is coming from the Administration, perhaps other responsible members of the media will follow suit and the whole truth will emerge.  And we can hope that those who made the decision to lie to the American people will be exposed and held responsible, and the families of those who died while in service to our country will finally receive the truth about the failure to render aid to their loved ones.  This is the first trickle of such truth; may it turn into a flood.  Ambassador Christopher Stevens, Sean Smith, Glen Doherty and Ty Woods deserve nothing less for their sacrifice.

Proverbs 12:22     "Lying lips are an abomination to the Lord, but those who act faithfully are his delight."
Posted by Pam Kohler at 7:00 AM