I am writing this blog post, knowing that I will receive both private and public criticism for my theory, as I have in the past.  But this issue is too important to stay silent, when more and more information is forthcoming and doctors are beginning to give it credence.
What am I talking about?  Chemtrails!  I can already hear a particular friend who is an ex commercial pilot coming unglued again.  He keeps trying to tell me that pilots would never agree to releasing chemicals into the air.  But I can't seem to make him understand that it is not commercial planes or pilots that are responsible.  In fact, I would hazard a guess that drones are being used. 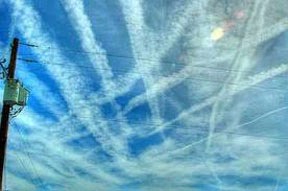 I find it hard to believe that people don't question the sudden appearance of criss-crossed trails in a sky, that just 15 minutes before had been completely clear blue, with not a cloud in sight.  These are not random wisps of clouds, or the contrails from passenger jets.  They are in a definite pattern, and I have seen a clear sky suddenly inhabited with these mysterious "trails", and within 30 minutes they have dispersed into wide paths of unusual, wispy formations that blanket the once-clear sky.  That does not happen when a passenger jet flies overhead!
And now a website called Before It's News, has published a feature article concerning chemtrails.   The article cites a retired Bio-environmental engineer from the Air Force, who blew the whistle on the amounts of hazard materials (aluminum oxide, barium and strontium) that were appearing on base from a contractor that was not on an authorized list.  Kristen Meghan started asking questions, because while aluminum naturally occurs in our soil, radioactive barium and strontium do not.  After testing soil samples in her area, she realized, according to her own words, "those tin-foil hat wearing conspiracy theorists might not be wrong, after all."
And her conclusions are becoming adopted by an increasing number of neurologists; and here's why.  As a neurosurgeon, Dr. Russell Blaylock (who the naysayers will label a "self-promoting hack") is becoming concerned over the tons of nanosized aluminum compounds being sprayed on us via chemtrails.  His findings?  “. . . an infinitely more reactive and induced, intense inflammation in a number of tissues. Of special concern is the effect of these nanoparticles on the brain and spinal cord, as a growing list of neurodegenerative diseases, including Alzheimer’s dementia, Parkinson’s disease, and Lou Gehrig’s disease (ALS) are strongly related to exposure to environmental aluminum.”
But what caught my attention are the conclusions of Dr. Edward Group, who is also speaking out against chemtrails.  He explains how chemicals sprayed from chemtrails can “turn on” certain issues such as shingles within your body (under certain circumstances).  You see, PLW, who is otherwise very healthy and suffers only from seasonal allergies, recently endured what our doctor said was "the worst case of Shingles" he had ever seen.  That might not be cause for alarm, or seem so unusual, except that we noticed an almost epidemic outbreak of shingles among our small community, within a very short time span.  It was almost like there was an outbreak caused by external elements.  And shingles, which is usually thought of as an "old person's disease", was attacking young, healthy individuals.  The pharmacist reported to me that he knew of a man in his 40s who had been suffering from a continual case of the shingles for 3 years!  No doctor had been able to determine why or help alleviate his suffering.  I can tell you that PLW was sicker than I have ever seen him, and he still bears the scars from the attack, nearly six months later.  Was this outbreak a result of the increased incidences of chemtrails that I and my neighbors have noticed?  We can't prove it, and no one will admit it.
But as the article reports, Dr. Blaylock has suspicions that Aluminum exposure from chemtrails is helping to lead to aluminum-induced cognitive disorders among the population. Aluminum can even affect unborn babies, not just the elderly, since it crosses into the placenta via the blood.
Another toxin being found in chemtrails is Strontium-90. It isn’t any better. Neither is Barium.  The impact of these compounds upon human health is unmistakable. So why is this happening?
Again, the article states that there are all kinds of theories.  But more experts are pointing to the following possibilities: the overt actions of Monsanto-monopolies; an utter disregard for nature by multiple corporate entities; the ever-present war-mongering that leaves us with tragedies like Fukushima; and get, ready, you will really need your tin foil hat for this one .... the general disregard for human life that the Bill Gates of the world embrace (i.e, there are too many people on the planet).
The truth is, we cannot definitively prove what those "strange" criss-cross patterns in the sky are, or why, within days of their appearance, I and my neighbors begin noticing upper respiratory issues.  That is, we can't prove it .... yet.  But more and more credible people are beginning to toss aside the "conspiracy" label and look further into the matter.  That is the good news.  But just because we can't pinpoint the reason why this is happening, it doesn't dispel my thoughts that two things are for certain: chemtrails are real, and chemtrails are dangerous.