You might have seen this story in the last week or so, but I think it bears repeating.  Anytime we witness the unselfish love of one human being for another, I think we should shine a light on it. 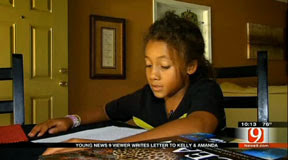 Tobias Bass is not your normal 10-year-old.  He is obviously smart and has set high goals for himself.  He has a shelf full of trophies and ribbons, and is active in football and jiu-jitsu.  His life's ambition is to be a pastor for soldiers, and minister to those dying on the front lines. But right now he is focused on his older brother, Titus.
Titus, who is 11-years-old, has cerebral palsy.  He can't walk, hear, or eat.  In fact, Tobias said Titus “cries when he sees people outside” because he knows he can’t join them to run and play and enjoy the fresh air.  So being the God-filled young man that he is, Tobias wrote a 3-page letter to his local TV station, asking for their help.
He was careful to make sure they knew he wasn't asking for money.   After hearing his church pastor say that Christians should be "God's hands and feet", he decided that he would be Tobias's legs.  In his letter, he asked if there was anyone who could "loan" him a jogger push-type stroller so that he could push his brother in a local 5K run.  He explained that he had been training for the event by running 2 miles each day and pushing a baby stroller.  But Titus was too big to fit in the tiny stroller, and his single mother could not afford the jogger they needed. 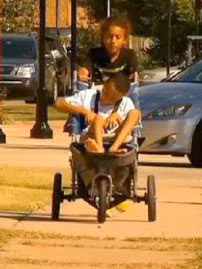 So in his letter to Edmond, Oklahoma station KWTV, Tobias asked for help in this manner: “Can you go on the news and not ask Oklahomans to give me anything, but to loan me a jogger pusher so I can push Titus in the 5K?”  He also offered something in exchange.  “If someone can loan me a pusher, I will volunteer myself out to any other parents who want me to run their disabled children in a 5K.  I can be the legs for more than one kid,” he wrote.
Needless to say, someone stepped up after hearing Tobias's letter, and the brothers received their jogger; one they can keep.  And in case you think this kind of behavior is unusual for Tobias, read what his pastor thinks of him:  “Tobias is one of my favorite kids in the world,” said pastor Craig Groeschel of Life Church." (Tobias calls Pastor Groeschel a “mentor” in his letter and it was his biblical mandate that inspired Tobias to write the letter).  “He is already making a big difference in the lives of many people, and I am confident he will continue to do so.”
Tobias has never run a 5K before, but he remains undaunted.  “I’m just gonna believe in God and just let him take over so I can just try my hardest.”  I have no doubt that God will be there running in step with this young man all the days of his life.  God Bless you, Tobias, for inspiring us all!

1 John 4:19-21    "We love because he first loved us. If anyone says, “I love God,” and hates his brother, he is a liar; for he who does not love his brother whom he has seen cannot love God whom he has not seen. And this commandment we have from him: whoever loves God must also love his brother."