I don't know how any believing Christian could ignore the headlines:  Islamic Jihadists Murder Sleeping Students in Nigeria .... Jihad Displaces More Than 60,000 in Philippines .... Afghanistan:  Execute Converts to Christianity .... Egypt:  Churches, Schools Razed To Erase Any Christian Presence.  If these news stories don't send a chill down your spine, then your normalcy bias is running in over-drive.
Yet, even mentioning that Christians are being persecuted and killed by Islamic Jihadist Muslims is either ignored -- or worse -- censured in our national dialogue.  We are told that we are exaggerating, or we are racist, or we are simply deceived.  There are those that would have you believe that this is not actually happening, or at the very least, they are isolated incidents.  Then there are others who tell us that it is happening, but "over there".  This is America!  There are no jihadists in our country! 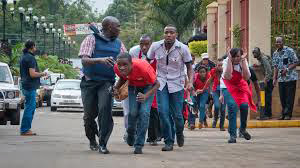 But I would venture that the Kenyan mall atrocity should awaken every citizen across the globe to the possibility that they could become targets.  Especially Christians!  That's why I want to point out this fact:  While the above headlines cite jihadist Muslims as the perpetrators of this persecution, they are not alone.  Last month a large mob of Hindus destroyed a Christian church in northern India and then beat the pastor and his congregation.  Four previous pastors were driven away because of this kind of ongoing violence by Hindus against Indian Christians.  But Asia and the Middle East are not the only places.
Protestant church leaders in Bolivia are bucking a new law that they claim imposes religious beliefs contrary to their own and denies them the right to be a church.  Law 351 stipulates a standardized administrative structure for all religious organizations that would force churches to betray their true ecclesiastical traditions.  Protestant leaders claim that the new law gives the Bolivian government regulatory power over the internal affairs of their denominations to the point of defining what is and isn't a church.  I'm sure you can see that this could become a stepping stone to the government controlling actual church teachings and doctrine.
Meanwhile, at the Pakistan Consulate in New York City, protesters carried banners stating: "Pakistan is a Living Hell for Hindus, Sikhs and Christians".  Kidnappings and forced conversions are becoming a hallmark in this radicalized Islamic state.  Religious minorities have no voting rights, and Christians in Pakistan face a new period of uncertainty amid news of increased violence against believers and the adoption of what human rights groups call "a move towards a Taliban-style government" in a key region.
I point all this out to you to make you aware that persecution against Christians has long been the goal of many radical groups.  The increasing number of headlines touting such violence should give you serious pause.  And what nation is seen as being primarily Christian?  If you think that the kind of violence that the rest of the world has been experiencing of late will not infiltrate our shores, then you probably think the Boston Marathon bombing was a random act by two misguided brothers, right?
Pay attention!  The increased frequency of news reports, along with the increased number of victims should tell you something.  We are living in dangerous times, and my Biblical worldview has informed me of what is on the horizon.  Our Lord warned us that because the world hated Him, it would hate us, also.  So now is the time to prepare ourselves and fortify our spirits.  Know what you believe and in whom you put your faith.  Christians around the world are being tested and our time is soon coming.  Prepare so that you might stand!

2 Timothy 3:12-13    "Indeed, all who desire to live a godly life in Christ Jesus will be persecuted, while evil people and impostors will go on from bad to worse, deceiving and being deceived."
Posted by Pam Kohler at 7:00 AM

Email ThisBlogThis!Share to TwitterShare to FacebookShare to Pinterest
Labels: Christianity, Persecution, The Church